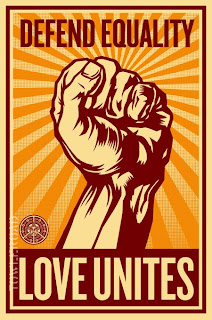 (Image Credit: Shepard Fairey [whose Obama posters probably caught your eye during a recent presidential contest], by way of Towleroad.)

Brief Memo on How to Choose Sides in a Political Dispute: Go with the one that has the prettiest posters. Oh, yeah, and the position consistent with the principles of liberty and justice for all. Cool tee-shirts a plus but not mandatory.

Snarky Reply to HRC President Joe Solmonese's Invocation of Martin Luther King, Jr.'s "Letter from Birmingham Jail" in Calling on Queers to Become "Extremists for Love" in the Wake of a Solid String of Defeats for Gay Rights on Nov. 4: So, Joe, goin' all civil rightsie on us now, are you? Hopin' to turn San Fran into Selma-on-the-Pacific, since your previous strategy of trying to turn politics into a Pottery Barn catalog of lovely, non-threatening celebrity spokespeople who are adorably gay but not threateningly so failed so spectacularly? Go right ahead, Joe, and we will sit down at the lunch counter with you and maybe order up a no-carb snack, but we think you should re-read the memo about not blaming black voters for the passage of Prop 8 before you head out to organize in the African-American community. Your smarmy lines about it being "particularly jarring" that a majority of Af Ams voted for Prop 8 and "why the community that has endured the most violent and persistent discrimination in our country's history failed to understand our struggle for human rights" drip with condescension. We'd recommend that you think twice (and perhaps stop by The Angry Black Woman) before marching into the churches with your Quotable MLK to lecture black folks about discrimination.

Short Bibliography of Prop 8 Protest Coverage and Reaction Pieces: Save a tab or two in your browser for Pam's House Blend and Towleroad, which are all over this story. They make us proud to be queer, here, and in the blogosphere.

Update on Things We Have in Common with MSNBC's Rachel Maddow: Maddow wore pajamas on her show the other night in solidarity with bloggers, who so often get trashed as non-serious for working in their jammies. Maddow said she thinks of herself as a blogger on TV. Dear Butch PhD -- What an amazing coinkydink! My typist works in her jammies and thinks of herself as an incredibly witty TV host with a computer! You two should meet -- in your jammies, perhaps, over a nice bottle of -- Goose, step away from the computer. You know we're just kidding! Here's the vid of Maddow en pyjamas (picked up on the YouTubes by way of Towleroad, because that's what we're reading this morning, in our snuggly purple robe that we've had since the last millennium):

Helpful Hint for Foul-Weather Activism: Someone left the protest sign out in the rain, but don't worry -- It's weather-proof! Forecast for Washington, DC tomorrow is pretty dreadful, but the veteran rabble-rousers of Roxie's World don't think that should deter you from attending the DC March for Equal Rights, which starts at 1:30 at the Capitol Reflecting Pool. The moms attended the protests at Shrub's first inauguration in 2001, on what was, in so many ways, one of the dreariest days in human history, but their hand-painted signs held up beautifully, thanks to an impervious combination of Saran wrap and duct tape. The same cannot be said for their hair, but the moms have always been willing to sacrifice beauty to the causes of orneriness and justice. They were honored to be among the clouds raining on Shrub's pathetic little parade, so get out your Tempra paints and join them tomorrow for the latest round of "What part of 'Equal Justice Under Law' do you not understand?" Be there, or be square, kids.
Posted by Roxie Smith Lindemann at 9:05 AM