There is bone-crushing weariness in Roxie's World this evening, my dear, content-craving readers. (You do remember that my typist has a morning class on Wednesdays this semester, don't you? And you realize she was up awfully late last night following returns and helping clean up after the election watch at Ishmael's, the seedy yet cozy bar around the corner from the global headquarters of RW Enterprises, LLC? And fielding phone calls from drunken friends hanging on the White House fence at 1:45 a.m.?) We've barely begun to wrap our paws around the many stories of yesterday's elections -- the resounding triumphs of Barack Obama and the Democratic party, the sea-to-shining-sea repudiation of Shrub and the once respectable party he and his cronies destroyed, the heart-breaking defeats suffered in the battle for LGBT civil rights. We're not ready yet to try to make sense of it all for you, the members of our far-flung, motley, beloved pack of fighters for justice.

If we made a joke, it would fall flat. (What's the difference between a pregnant pig and a California queer? The pregnant pig has rights recognized in the state's constitution.) If we tried to get analytical, it would sound (and be) shallow. (Beware the rush to declare Obama the poster boy for post-ness [post-race, post-civil rights, post-partisan . . . .]! We still have a ton of work to do!) (If you want some good analysis along these lines, see Tenured Radical's post today, the message of which is, Beware the temptations of instant history.) Heck, kids, we're even too tired to weigh in on the question upon which this blog is most equipped to advise America's new president-elect and first-family-in-waiting: the burning issue of what kind of PUPPY the Obama girls will get to take to the White House with them. (Dad promised them one early in his victory speech last night, and I'm figuring that's the kind of promise even the slickest politician wouldn't dare break.) Fortunately, the New York Times has already pounced on this story and has some good advice for Malia and Sasha as well as some adorable photos. Roxie's World has only one word to offer on this subject, but we think our readers, with the possible exception of Dudley the Beagle, will agree it ought to settle the matter: TERRIER.

So we're tired and cranky and not feeling the same kind of political exaltation that many of you are probably feeling right now. We were moved and encouraged by much of what transpired yesterday. We were as amazed as Shakesville's Melissa McEwan was that Moose's home state of Indiana actually did turn an extremely light shade of blue in the middle of the night last night, which is why we've borrowed Liss's cleverly doctored map of the election results to send a friendly little shout out to all the folks back home: 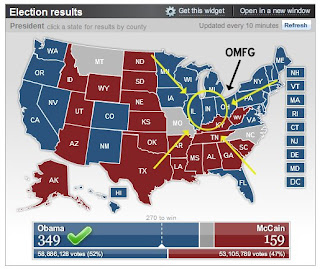 We are thrilled to imagine what it will be like to see the president-elect and his family settled into 1600 Pennsylvania Avenue. We have long felt that what this country really needed was a 6-foot tall black woman in peak physical condition running the show in the White House. This Queen of America is going to take Washington City by storm, of that we are certain. And the English profs 'round here are getting an extra-special kick out of knowing that the odious culture warrior Lynne Cheney is about to be replaced as Second Lady by Jill Biden, a community college English professor. We haven't fact-checked this one yet, but we're willing to bet Biden will be the first member of any sitting presidential or vice-presidential family to have a listing on ratemyprofessors.com.

Elections matter, or we wouldn't have been writing and thinking as obsessively about this one as we have been for the past year and a half. Historical firsts matter, because they do signal deep transformations in a nation's politics and in what we might call, for lack of a better term, its soul. But yesterday's defeats are, in their way, as important as yesterday's triumphs. Even as we savor the victories, we must unflinchingly assess the defeats and prepare ourselves for the difficult work that lies ahead. (Pam Spaulding gets that analysis started here.)

Which is why, my friends, the denizens of Roxie's World are headed off to bed. Congratulations, dear ones, and sweet dreams. 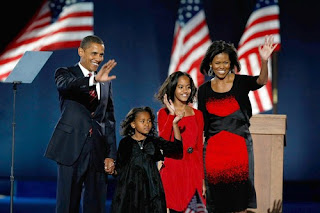