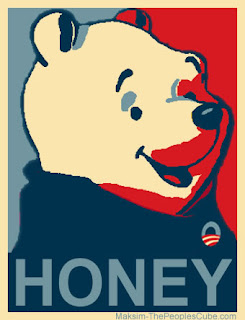 (Image Credit: Maksim, ThePeoplesCube.com [You'll have to scroll way down through a lot of other images to get to this one, but if you enjoy the parodies of Shepard Fairey's iconic Obama poster, it's worth the trip.])

Why pre-holiday eye candy? Several reasons. One, it has no calories, and you need to save room for all the gorging you'll be doing over the next several days. Two, we think some of our readers might be in need of a snuggly, cuddly, and slightly ironic image of Winnie-the-Pooh to gaze at as they steel themselves for whatever dramas and disappointments may arise over the holiday. We realize it's an emotionally fraught time, and you might not be able to take your dogs with you on your trips. We suggest you take a laptop along and come click on this post whenever you feel the need for a little virtual hug. That's what Roxie's World is here for, kids, and dog knows you need us. We'll be here when the last piece of pie is gone and you're still not done trying to plug up that hole somebody put in your heart. We'll be here after your drunk aunt has broken the last of the crystal wine glasses you inherited from your grandmother. We'll be here when your racist step dad has gone off on his fourteenth tirade about the Muslim socialist who's getting ready to move into the White House. And, yeah, we'll even be here when your littlest nephew takes his first tottering step and throws you a look of delight and dawning self-confidence that takes your breath away. We'd love to hear about that.

Holiday angst and sentimentality aside, our main reason for tossing out some snappy images is to pass along the results of research recently undertaken by the powerful Office of Eye Candy here at RW Enterprises, LLC. The team of old yearbook editors and skinny kids in tight jeans who work there has been surfing the internets looking for information on Shepard Fairey, the graphic artist who designed the Obama poster parodied in the image above as well as the to us far more compelling "Love Unites" poster he did in the wake of the passage of California's Prop 8. We found a couple of interesting news articles, including one in Wa Po and one in the LA Times focused on Fairey's reaction to the pilfering of his work. Not surprisingly, given his roots as a street artist, Fairey is blasé about such appropriations and variations, seeing them as confirmation of the power of his original image: "When something becomes pervasive enough, it becomes a reference point that people are going to use for commentary and parody," Fairey said. "They build their own thing off of it and use it for their own agenda."

If, like us, you loves you some parody, you will want to check out the impressive collection of riffs on Fairey's Obama assembled by Rene Wanner. It's well researched and beautifully presented so that you can easily see all 149 parodies he has compiled. We also give a grateful hat tip to Wanner for helping us answer a question that has gnawed at us ever since we tossed up the image of a parody that used the Pope in place of Obama in a post we did back in September. Our blog pal and top-notch scholar Historiann liked the image, too, and asked about its provenance, to which we offered a sheepish, "Dunno, dude, we stole it off the internets." Well, Historiann, we can now tell you that the Pope poster was designed by Michael Ian Weinfeld and commissioned by ANIMAL, an extremely hip online magazine, in connection with Pope Benedict XVI's first visit to the United States. (More links to Fairey and Obama parody stories here. You know, if my typist weren't already complaining bitterly about overwork and fragmented attention, I would order her to delve more deeply into the whole underworld of cool graphics and image freaks on the internets. Y'all would love it, wouldn't you?)

The truth is that eye candy is another of the answers to the deep-thoughtish question we were pondering here the other day -- "Why do we blog?" We blog in part because we deeply and freakishly heart the way in which the (plat)form allows us to think with images, to play with them, to work with them and re-work them -- as a way of telling stories, as aspects or objects of critique, as a means of arresting the fast-moving eyes of our impatient readers as they careen through cyberspace. Slow down, our pretty pictures implore. Slow down. Stay here. Look at me. See me -- truly. I am here for you. 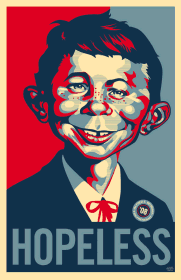 We'll close with Fairey's favorite of the Obama parodies, the hilarious, if in some ways predictable, cover Mad magazine ran in October. "I loved Mad as a kid," Fairey said of the spoof of his work. "I think Mad’s satire heightened my understanding of irony and hypocrisy. I’m very excited to be a part of Mad’s history." We would be, too, and, if it were us, we'd probably be so excited that we'd also overlook that what Mad is satirizing in this instance is the obvious lack of irony in the cringe-inducing secular religiosity of Fairey's original Obama poster. Sweet pea, we won't bother to explain to Fairey, you're the reason we started calling Obama "His Hopeness." That Pope parody? A no-brainer, man -- bound to happen. But never mind -- We'll cut Fairey some slack in the hope that he won't come after us for prominently displaying his "Love Unites" poster in the side bar. Can't help it, kids -- We are suckers for any combination of red and yellow and graphics that hearken back to WWII propaganda posters. Can't. Get. Enough.

What are we thankful for in Roxie's World? Why, you, of course -- always and forever. Peace out.
Posted by Roxie Smith Lindemann at 10:39 PM