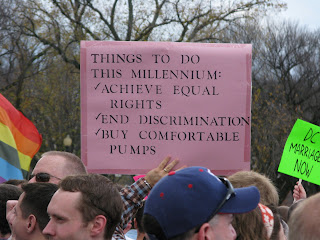 Roxie's World was there in force, and our hearty band of queers was not deterred from marching, even when the heavens opened up for an "Auntie Em!"-worthy moment not long after step off. The crowd assembled at the Capitol Reflecting Pool and slogged down the south side of the Mall, eventually making its way to Lafayette Park. Security was tight but friendly. We ran into DC Police Chief Cathy Lanier at the corner of 17th and Constitution, who smiled broadly at our greeting and promised to get us stragglers to our destination safely. (Oh, and qta spotted Andrew Sullivan in the crowd just before the storm broke.) There was no real "rally" at the end of the march, so we hung out in Lafayette Park for a few minutes and then sensibly repaired to the Old Ebbitt Grill for the traditional (for Moose and Goose) post-protest snacks and beverages. Hard to estimate the size of the crowd -- Maybe 3000, but the mass got a little fragmented during the storm before reconstituting itself for the second half of the march. A highlight was a rainbow that briefly appeared behind the Washington Monument as we made our way across 17th. Moose tried to capture it in the photo below, but you'll have to squint to see it.

Enjoy the pics, and tell us about your experience of the day, kids. The fight goes on. Hope you've got your comfortable pumps and a lifetime supply of Tempra paint so that you're always ready for a protest. Oh, and dorky LL Bean rain jackets, because it will rain, and then you won't care what you look like.

All photos by Moose. 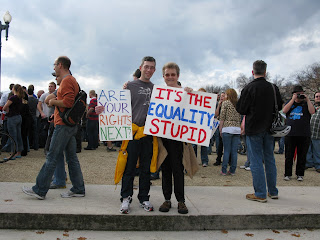 (qta and Goose at the Reflecting Pool. "It's the Equality, Stupid" sign by Moose.) 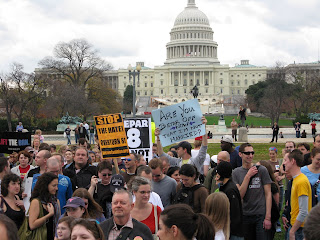 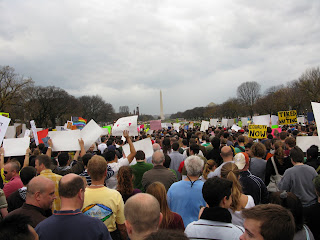 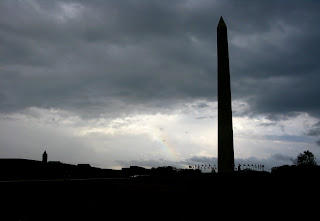 (Moose swears there is a rainbow in this shot.) 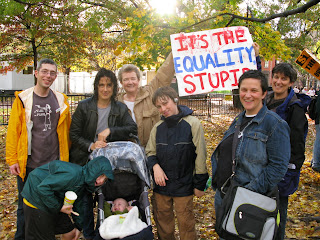 (The few, the proud, the bedraggled. Goose pulled the sign out of the garbage after Moose had given it up for dead. Goose's faith in lost causes is one of the things we love about her most.)
Posted by Roxie Smith Lindemann at 7:46 PM