Roxie's World refuses to comment on positions that Senator Hillary Clinton may have been offered and might have accepted in the administration of President-Elect Barack Obama. Why? Because we've noticed that every time we get all puffed up and confident about something having to do with the junior senator from New York, it disappears into thin air and we are left with egg on our faces, ashes in our throat, and disappointment in the depths of our leaky heart. So we will say nothing, nada, not a word, not a peep, not a whit, not a woof, not a yelp, not a whistle, not a whisper, not a whoop, not a holler, not a shout, not a cheer, not a chant, not a huzzah or hurrah or hooray or yee-haw about how happy we are for Senator Clinton, how impressed we are with the cabinet the president-elect is assembling, and how thrilled we are at the prospect of the country's tattered global reputation being mended by one of the smartest girls on dog's earth. But we are not saying anything, doggone it! We are not saying anything. In an effort to continue not saying anything about Hillary Clinton becoming secretary of state in the Obama administration, we are going to amuse ourselves by coming up with a caption for this photo that ran on the front page of this morning's New York Times (although it was taken in October, when Obama and Clinton were campaigning together in Florida). 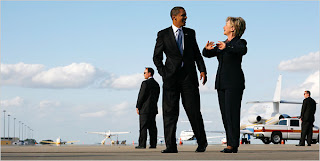 Our Caption: No, no, Barack -- It's, "Out came the sun and dried up all the rain,/And the itsy bitsy spider went up the spout again," not "up came the sun." Trust me, 'kay? It was Chelsea's favorite song.

What's your caption? And what are your thoughts on the emerging shape of the Obama (hey, it turns out the Clintons weren't wrong about everything) administration? 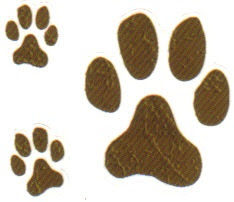 So far, we'll give it a paws up on smarts and experience, even as we try to stifle the chortles from the Department of We Told You So (as in, we told you there was no substantive difference on policy between Obama and Clinton, we told you he was a centrist, we told you he wouldn't close down the Pentagon his first day in office and turn Kumbaya into the national anthem). Turns out the Hopey Changey Crowd realizes the business of governing requires the expertise of those who have spent some time in the sausage factory, no matter how much it offends the delicate sensibilities of the blogger boyz. There, there, boyz. Have yourselves a nice bowl of tofu and spinach. Barack and Hillary have a country to run and a world to repair.
Posted by Roxie Smith Lindemann at 11:28 AM