Ceci n'est pas une endorsement -- But it might not be a bad idea: 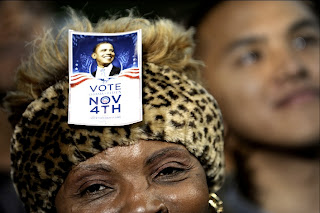 We've spent the weekend gazing into our crystal water bowls here in Roxie's World, kids, and here's what our crack team of canine/queer political analysts, prognosticators, and make-up artists (as in, "When we have no idea what to think, we just make something up") is prepared to say about Tuesday's general election. We expect our smarty-pants legions of loyal fans to offer up a few predictions of their own in comments, so put on your pundit caps and have at it. Plan to spend Tuesday evening right here with us, downing cocktails and half-priced appetizers at Ishmael's, the seedy yet cozy bar around the corner from the global headquarters of RW Enterprises, LLC. Polls close in the battleground states of Indiana and Virgina at 7 p.m. Goose is predicting that we'll know who the winner is by 8:13. Moose, who studies these things much more carefully, thinks Chris Matthews will explode from the effort of not declaring Obama the winner by 7:51. I predict both moms will be drinking Boston Sidecars, a delicious beverage they tried for the first time last night, and may not even notice when the election is called, but, here, without further ado, are Roxie's World's Endorsements, Predictions, Hunches, and Gut Feelings about Election 2008 (praise dog it will soon be over!).
What, you want more? You want us to go out on a few limbs and make some really bold predictions about toss-up states and the really tight races? Why? So you can come back here on Wednesday and force us to dine on crow casserole again, as poor Moose had to do after her predictions about the Texas and Ohio primaries proved to be so wildly incorrect? Ah, what the heck. It's not like any of the real pundits ever has to pay for being wrong. Here we go.
Closing Thoughts: It's been a long, strange journey, hasn't it, fellow citizens and loyal fans? We've trudged virtually together through the snows of Iowa and New Hampshire and the searing sun of, oh, you know, those really hot states. As we approach the moment of decision, the moment when the magic and the majesty of democracy will assert itself in millions of individual acts of choice and, yes, hope, we want you all to know that, though we never officially endorsed Barack Obama's candidacy, we will celebrate his triumph, should it come, and welcome his presidency as an historic achievement and a vital political opportunity -- for the Democratic party and the American people. In the days to come, we will not hesitate to hold our party and the nation's leaders-in-waiting to account, to urge them to be bold and just, to move quickly to demonstrate that they deserve the faith that is about to be placed in them. Tonight, though, as we contemplate the scale and significance of the transformations about to occur, we pause to savor the sense of amazing possibility and close with the words of former Wa Po writer Donna Britt, who came back to her old paper this morning to offer these thoughts on the possibility of the United States electing its first African-American president:

For one shining moment, let's call a halt to our red-blue bickering and predicting. Rather than glancing back at our racist past or peering into our uncertain future, we'll allow ourselves a brief celebration of now. We'll be brave and reckless enough to be happily surprised by one undeniable change:

Against all sensible odds and reasoned predictions, untold numbers of Americans of every persuasion have opened their hearts, minds and souls to the possibility that a black man is the best choice to lead them. Whatever happens, an immeasurable amount of light has illuminated our darkness. Once such doors have been pried open, it's hard shutting them as tightly as before.

That's a change worth believing in.

Amen, sister. Vote early and often, kids, and we'll see you back here on Tuesday. Peace out.
Posted by Roxie Smith Lindemann at 4:18 PM