Grow Old With Me 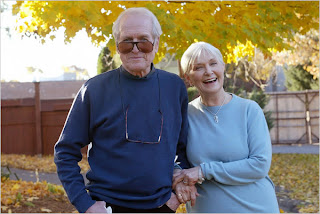 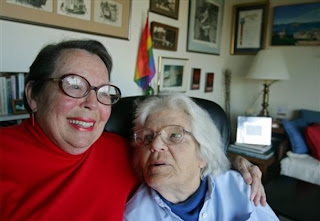 The two couples in the photographs above have a lot in common. The partners in each couple share a passion for social justice and have fought hard for a range of causes over many years. They have professional interests in common, too -- acting and directing in the case of Newman and Woodward, writing and editing in the case of Lyon and Martin. Somehow, despite the usual and unusual pressures upon them, both couples built partnerships that managed to endure for more than half a century -- 55 years in the case of Lyon and Martin. Sadly, with Paul Newman's death yesterday, one member of each of these couples is also now a widow. Del Martin died in August, just two months after she and Lyon were the first same-sex couple to be legally wed in California.

You see what I'm getting at, don't you? I've set you up to see the similarity between Joanne Woodward and Phyllis Lyon, women of substance and courage who shared their lives for more than half a century with loving companions and co-conspirators who worked with them to realize the dream of a better world. And now, of course, I want you to pause to consider the differences between the widows Woodward and Lyon. Woodward, who was married in the eyes of the federal government, will be entitled to full Social Security survivor benefits. Lyon, who was married only in the eyes of the state of California, will get nothing from Social Security. Nothing. Yes, it is crazy that benefits are tied to marriage, and we should work our tails off to de-link the two in the long run, but in the short run we need to think about the widow Lyon and the profound injustice of the states and federal government refusing to recognize and equitably treat a marriage licensed in one state. We've been down this road before. It's a dead end. Justice demands that Joanne and Phyllis be viewed as the same in the eyes of the law.

Truth be told, there is more on our minds here than justice for the widow Lyon. Truth be told, we were reflecting on the melancholy topics of queer age, death, survival, and (in)security for several days before Paul Newman's passing -- which we sincerely mourn -- gave us an occasion to point out the inequities of queer bereavement. As you know, we lost a good friend in Roxie's World last week, which is still weighing on our hearts and perhaps causing us to ruminate more than usual. A couple of other friends have lost elderly parents after long, painful illnesses or slow declines in the past year, so we've been thinking a lot about caretaking and the delicate renegotiation of relationships (with parents, partners, and siblings) that occurs as parents and adult children age. There have been other changes in Roxie's World recently -- new babies, new jobs, sudden moves to the other side of the country, separations of various kinds. Sometimes lately Moose has felt a little bit like Dorothy standing wide-eyed in Oz, marveling, "My! People come and go so quickly here!" She and Goose have joked that they are the still points in the universe, but stillness, she knows, is relative. The ground is always shifting, the future always uncertain.

In this pensive mood, Moose came across a Newsweek article on the unique needs and challenges of the growing population of LGBT senior citizens. It's a wonderful, if not especially happy-making, article supplemented by videos of interviews with feisty queers coping with the physical, emotional, social, and economic challenges of growing old gay. (H/T to SAGE, the nation's oldest service and advocacy organization for LGBT elders, for helping Newsweek with this project.) The report cites fairly grim statistics suggesting that LGBT seniors, in addition to facing discrimination in medical and social services, are more likely to live alone, more likely to be uninsured, and 10 times less likely to have a caretaker than their heterosexual counterparts. Here's the problem in a nutshell:

"In many ways, this population is a mirror opposite of what the mainstream aging community looks like," says Karen Taylor, director of advocacy and training for the New York-based Services and Advocacy for Gay, Lesbian, Bisexual & Transgender Elders, or SAGE. . . . "The average senior in the United States lives with one other person; two-thirds of LGBT seniors live alone. If you don't have those informal support networks built into your life, then everything else becomes a bigger issue. Who forces you to go to the doctor? What happens if you fall?"

What happens if you fall? In the post-Stonewall period, queers have been amazingly resourceful at building support networks, communities of care, and models of intimacy that in some ways mimic heterosexual models of marriage and family and in other ways radically re-imagine them. Such bold re-imaginings helped to re-shape sex and gender identities and were crucial to surviving the devastations of the early years of HIV/AIDS. As queers of the baby-boomer generation move into their senior years, one hopes that those networks of support, those extended but fluid circuits of alliance, friendship, and love will be durable enough to answer the question, What happens if you fall? As Moose was pondering such questions while trying to fall asleep the other night, she suddenly declared to a weary Goose, "We should have had a daughter!" When Goose finally figured out what she was getting at, she replied, "Don't be ridiculous. Not every daughter wants or should have to take care of her mother. I refuse to worry about this right now, and neither should you. We will figure out what to do when the time comes. Goodnight."

"She's probably right," Moose thought, as she drifted off to sleep. "We've been making it up as we went along for twenty-five years, and so far everything has turned out all right. There is something to be said for improvisation. I just hope someone will be there to catch Phyllis Lyon if she falls."

Here's the song we were humming while we were thinking through these issues, which is why we borrowed its title for this post. John Lennon wrote it, Mary Chapin Carpenter performs it, and the video is a fairly cheesy celebration of somebody's 40th wedding anniversary. Just close your eyes, and listen to Carpenter's beautiful vocal:

And, yes, beloveds, we know full well that the pretty boys and smart girls of Roxie's World will take care of us in our dotage. We feel you out there in the night, every night, and we know your strong, capable arms will be there to catch us if we fall, just as ours will be there for you. Peace out.
Posted by Roxie Smith Lindemann at 1:25 PM