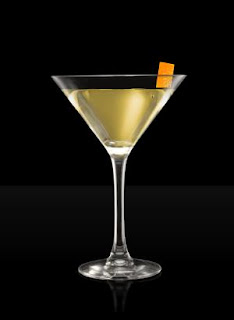 We’re gearing up for another Friday happy hour at Ishmael’s, the seedy yet cozy bar right around the corner from the global headquarters of RW Enterprises, LLC. Alaska is on the menu at Ishmael’s today, because barkeep Peter Coffin has decided to capitalize on the whole Sarah Palin phenomenon in hopes of bringing in a more up-scale clientele. The bloggers, profs, and grad students who tend to hang out here drink the cheap stuff and seem to think “tipping” is a city in China, if you’ll pardon a little bartender’s humor. Anyway, today’s half-price drink is the Alaska Martini, a potent mix of gin, chartreuse, and orange bitters guaranteed to take the chill off a cold northern night. Appetizer specials include Bering Sea Shrimp, Alaskan King Crab Tempura, and – Mark Twain’s personal favorite – Mexican Moose Dip, a hearty concoction of moose burger, Velveeta cheese, onions, and salsa.

So grab a stool, place your order, and join in the fun as the denizens of Ishmael’s launch a brand new bar game aimed at gauging the cosmic significance of Alaska Governor Sarah Palin’s stratospheric rise to the top of the American political scene. What are the cultural, literary, and linguistic consequences of such a sudden emergence? The game is called Palintology, and our crack team of lit critters and assorted other readers of the zeitgeist is ready to play. Object of the game? To amuse ourselves until we’re too drunk to care that Democrats seem poised, once again, to steal defeat from the jaws of victory in a presidential election. The game begins, appropriately, with the sound of a high-powered rifle shot that qta downloaded to his laptop. BOOM! And away we go!

Something new in the culture of course requires a new lexicon. Roxie's World has already added "palin-dromes" to the new word order, and with this post we offer up "palintology" for your consideration as well. Additionally, however, Moose and Mark Twain have labored hard this week, as reports of shifting poll numbers and hysteria among Dems mounted, to come up with a word that conveys the full-on freak-out unleashed by the rise of Sister Sarah. Here's the word they came up with:

palination: N. paroxysms of indignation, befuddlement, and wounded vanity as the faux-gressive bloggerboyz, Dem strategists, and liberal media whores (see, for example, big-shouldered Donna Brazile on CNN Wednesday night) absorb the shock of seeing Senator Barack Obama’s lead disappear as Republican vice-presidential nominee Sarah Palin transforms the landscape of the 2008 presidential campaign. Symptoms include gnashing of teeth, anxious second-guessing of vaunted Obama team's wisdom and strategy, and vicious denunciation of any vagina-equipped voter who utters the name "Sarah Pailin" without immediately denouncing her as an anti-feminist cretin who will destroy everything Hillary Clinton stood for. See also cross-palination: the process by which Republicans who saw no sexism in media treatments of Senator Hillary Clinton during her presidential campaign suddenly see it everywhere in the treatment of Gov. Palin. Palin herself, who accused Clinton of whining during the primary battle and now benefits from the GOP assault on the media, is a fine example of cross-palination in action.

A new cultural phenomenon also produces new literary forms -- or revitalized versions of old forms. Or that's what the English profs 'round here say. And thus we have the palin-ode. (Click on that link if you don't know what a palinode is. Trust us -- It will heighten the pleasure of what you're about to read.) (H/T to Candy Man, the official prosody consultant to Roxie's World.) Two examples will illustrate the form:

Palin-ode I, by John McCain

How do you beat the bitch? Some asked
I answered them with laughter
And now the bitch the Dems can’t beat
Is mine forever after!

Sarah Palin’s not a pig
And I did not imply it
But if I had I guarantee
I’d hasten to deny it.

Jokes and other forms of humor also always accompany the emergence of a new cultural force, and Sarah Pailin has earned deserved praise for her skill with a quip. Roxie's World has some pretty decent quippers on staff, though, and we think we've come up with a better joke than the one that has earned the chick gov such acclaim. We offer it up to all those Dems whose cages have been rattling ever since Palin came on the scene:

Q: What’s the difference between a hockey mom and a pit bull?
A: If a pit bull scares you, you can have it killed.

Pass it on, kids. We don't get paid for this stuff, so the least you can do is help us to achieve some fleeting glory on the internets.

We'll end with a couple of funny cartoons, passed along to us by a newly naturalized citizen of Roxie's World who shall be known in these precincts as GlassPen until such time as we get to know her better and can come up with something of our very own. Thanks for adding to the collection of, um, Paliniana, GlassPen, and thanks for entering our world. There's a free drink waiting for you right here at Ishmael's. Happy weekend, everybody. 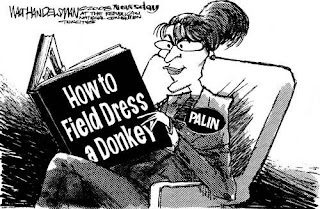 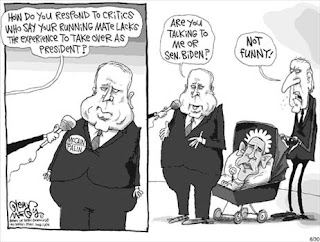