There is enormous relief at Ishmael's, the seedy yet cozy bar around the corner from the global headquarters of RW Enterprises, LLC, over the news that Republican John McCain has relented on his threat to bail out of tonight's scheduled presidential debate if there wasn't an agreement on the plan to force American taxpayers to rescue the irresponsible fat cats in the financial industry who seem intent on bringing you Great Depression 2.0. Fortunately, after yesterday's big confab at the White House, where McCain spent 40 minutes saying not much of anything, the Republican nominee awoke from his nap and realized he was running for president. He announced this afternoon that sufficient progress had been made in the negotiations to allow him to tear himself away from the cesspool of Washington and participate in the debate after all.

Ishmael's proprietor Peter Coffin is relieved because he recently pulled down some of the grimy old oil paintings (fishing scenes, mostly) that for decades had adorned the walls of his place and installed a bank of gleaming new plasma TVs as part of his effort to bring in a more up-scale clientèle. He was planning to debut the TVs tonight in a big debate watch with a Hawaiian-themed happy hour -- a clever marketing device and an homage, of course, to Barack Obama's birthplace. (You'll recall that Peter had an Alaska-themed happy hour a couple of weeks ago, in tribute to GOP vice presidential nominee Sarah Palin. Peter is a fair-and-balanced kind of guy, and Ishmael's is a cheerfully post-partisan establishment. No matter who takes office in January, 2009, Peter will be ready from Day One to take their money and keep them drunk.) 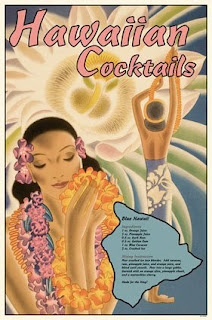 So the debate is on, and Peter is behind the bar, checking on his supplies of rum, curaçao, pineapple juice, and strawberries, hoping he'll be moving a steady stream of Blue Hawaiis and Lava Flows all evening long. He had to take out a second mortgage on the place to finance the TVs, and he has a hunch Congress won't be willing to come to his rescue should his happy-hour plan not succeed.

As Peter works and worries, the new TVs flicker with an assortment of images. Conveniently, they are tuned to different channels, and each shows a different story Roxie's World has managed to overlook in the course of a busy week. Luckily for us, our faithful readers have been tuned in and sending us a steady stream of gentle suggestions, most of which boil down to, "WTF, Roxie? Why aren't you paying attention to this?" We hear you, people, and we appreciate your noses for news. Let's take a look at Peter's big TVs, 'kay?

You are correct, Roxie Fan and Dudley's Human, we somehow managed to miss the metamorphosis of CNN's Campbell Brown into the feistiest chick in American political journalism. Let's call her Femme Non-PhD to distinguish her from MSNBC's Rachel Maddow, still known in these precincts as Butch PhD, even if we are grievously disappointed by what we've seen of Maddow's new star vehicle of a show. So far, Maddow is proving to be as in the tank for the Democratic nominee as all the boys on MSNBC, which has made their recent political analysis worth about as much as a share of Washington Mutual. Meantime, Brown has been offering political commentaries that are crisp, incisive, and edgy without being mean. They are a refreshing alternative to the unilluminating ravings of MSNBC's overly righteous and under-medicated Keith Olbermann. Take a listen to Brown going after the McCain campaign for keeping Sarah Palin away from the press. She rightly calls such protectionism sexist and demands that the campaign "free Palin" and allow her to stand on her own to face the scrutiny such a high-level candidate deserves:

You go, Alma Dale! We like the spunk and the smarts.

On the next screen, we've got a clip of Diane Schroer, the transgender woman who recently prevailed in a sex discrimination suit against the Library of Congress, which rescinded a job offer to Schroer after learning that she was transitioning from being a man to a woman. Schroer is a retired Army colonel and former special forces commander who specialized in tracking international terrorists but was denied a position as a terrorism research analyst with the LOC's Congressional Research Service. She won earlier this week in federal court, and Congressman Barney Frank, in his latest act of contrition for betraying the trans community in last year's battle over ENDA, immediately wrote to the Library urging it not to appeal the judge's decision. (H/T to a beloved Homo Librarian who works deep in the bowels of the federal government and keeps us up to date on what's happening on the Hill.)

Congratulations and a rousing chorus of "(You Make Me Feel) Like a Natural Woman" to Schroer, who tells her story in this video by the ACLU, which represented her in her suit:

Oh, and speaking of Barney Frank, let's pretend that we have video of him getting off the best line of this busy week, apropos of McCain's decision to suspend campaigning because of the financial crisis. Frank said of the move, "It's the longest Hail Mary pass in the history of either football or Marys." Oh, Barn, we love it when you go all camp on us! (H/T to T'Other Homo Victorianist, who feeds us even if he doesn't read us.)

Finally, because happy hour is fast approaching, and Peter thinks a music video will warm up the early birds, here's something else our pal Dudley sent our way, a very goofy song on the defenders of marriage by funny man Roy Zimmerman. We recommend it because we are in awe of anyone who can find a way to work a line like "two people who want to provide a protected and nurturing family environment" into a song. We'll have to see if we can get Zimmerman to join in our next game of Palintology. Betcha this guy could write one heckuva Palin-ode:

That's it for now, kids. We've still got a bunch of stuff in the mailbag, so don't get all hurt if we didn't work yours in here. Not everything is suitable for a Friday afternoon happy hour post, but the weekend has just begun. Settle down on this barstool right next to us, and order yourself some Coconut Shrimp to go with that Lava Flow Peter just sat down in front of you. C'mon, gentle readers. You know the Friday rule of Roxie's World: Belly up to the bar -- It's five o'clock somewhere. Bottoms up!

Update: We're not the only ones planning to drink our way through tonight's debate. Check out these excellent rules for a presidential debate drinking game, picked up on Feministe by way of our blog pal the Red Queen. Here's a teaser, just to give you a sense of the game:
Feel free to add rules of your own. Our suggestion? Every time someone makes a positive reference to George W. Bush, take a huge drink, because it may be your last chance!
Posted by Roxie Smith Lindemann at 2:11 PM