On Still Not Endorsing Obama 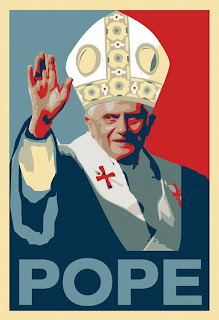 Every time we think we ought to just give up and endorse Barack Obama for president, along comes another roadblock, another stick in our craw, another clear piece of evidence that his commitment to some of the issues that matter to us is, shall we say, wobbly.

Today's bit of evidence? Douglas Kmiec, Pepperdine University law professor (yep, Ken Starr is still dean there -- Many blessings to you, too, Ken!) and former legal counsel to Ronald Reagan and George H. W. Bush. We learn by way of Tom Tallis on Pam's House Blend today that Kmiec, a staunchly anti-choice and anti-marriage equality Catholic who has endorsed Obama, will be featured as one of the "top faith surrogates" in Obama's "Faith, Family, and Values Tour" being launched next week in battleground states.

Look, folks, we get the whole big-tent thing and the idea that politicians have to prostitute themselves -- oops! I mean, um -- appeal to voters with deep, contradictory feelings on a range of issues, but at some point the spectacle becomes too tortured and sickening to endure. At the very least, such unholy alliances undermine Obama's scary-spooky argument to vagina-equipped and same-sex loving voters that He is the only thing standing between them and the legal reign of terror that would be ushered in by a McCain/Palin administration.

Just what the heck is wrong with Kmiec? Let us count a couple of ways. For starters, in a May column for Catholic Online, Kmiec justifies his support for Obama in part on the grounds that McCain's opposition to abortion is not really a pro-life stance but a pro-federalism stance that isn't really all that different from Obama's putatively pro-choice stance -- which Kmiec assures his Catholic readers is not really all that pro-choice because of Obama's emphasis on personal responsibility and on reducing the number of abortions. Seriously, kids, we are not making this up. Go read Kmiec for yourself! He argues that the only genuinely pro-life position would be one rooted in "the natural law presuppositions in the Declaration of Independence." As Kmiec helpfully explains:

As I see it, the “self-evident truths” of the Declaration have interpretative significance for the meaning of “life” and “person” in the constitutional text -- and that meaning makes life unalienable, which means each life from conception is unique and worthy of constitutional protection.

Were Senator McCain to be of the same mind, he would be pro-life. As it is, he and the GOP are pro-federalism, which is not a bad thing, but frankly, at this late date, insufficient.

Thus, as I see it, it is a choice between two less than sufficient courses . . . .

Um, 'scuse me, Senator Obama, I know I'm just a deaf old dog and everything, but, um, is that the way you see it? Sir? Natural law?

Then, because that just wasn't creepy enough, Kmiec argued in June in the San Francisco Chronicle in support of the ballot initiative aimed at overturning same-sex marriage in California. His reasoning here makes the natural law argument of the earlier piece seem positively progressive. Read these three paragraphs, and tell me again why Barack Obama is the best friend the gay community ever had:

Beyond correcting the court's disregard of the separation of powers, insisting upon preserving the link between marriage and procreation: 1) promotes the orderly continuation of the species; 2) avoids the uncertainties of single-gender effects on children (most parents readily recognize the distinctive contributions of male and female in child rearing); and 3) takes respectful account of the difficulties of accommodating religious freedom that arise subsequent to the legal acceptance of same-sex marriage. Oddly, and incompletely, the California Supreme Court managed to ignore these important issues in its 170-plus page opinion.

The proponents of same-sex marriage insist that inventing gay and lesbian marriage harms no one, but the above concerns suggest otherwise. Moreover, it overlooks the national and global decline in fertility, which threatens the economies of Europe and contributes to the weakness of our own. To say, as its advocates do, that the availability of same-sex marriage is not the principal cause of this decline in terms of absolute numbers is a fair point, but giving state approval to non-procreative marriage cannot be denied as a contributing cause to the decline of families with natural children.

Separating marriage from procreation may also have other remote, but frightening, ill consequences. Society should be skeptical of wider use of asexual procreation. An earlier dark moment in U.S. history employed eugenics to forcibly sterilize the mentally disabled. The push for artificial wombs and the genetic manipulation of intelligence already peppers scientific literature - a push that would no doubt grow, accommodating even the minimal same-sex desire for simulating natural child birth - claimed to be of interest for 20-30 percent of same-sex couples. When carefully assessed, the acquisition of unnatural reproductive means often advances the interests of the very affluent through a libertarian exercise that would threaten all hope of democratic equality.

We don't vote on the basis of anatomy or sexuality here in Roxie's World, and we don't hold a candidate responsible for every word that every supporter or surrogate has ever thought, said, or published. Nonetheless, we think it's fair to question a candidate whose support on fundamental legal and social issues is so mealy-mouthed that he will publicly ally himself with someone who compares non-traditional families to state-enforced eugenics programs! Politics may make strange bedfellows, but Obama/Kmiec is just a little too strange for our comfort. Sorry, kids, the Swiss flag still flies in Roxie's World. Peace out.
Posted by Roxie Smith Lindemann at 10:40 PM