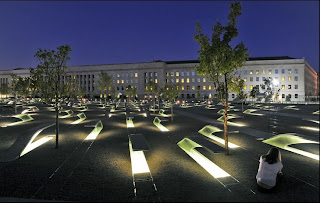 (Photo Credit: Bill O'leary, The Washington Post; the recently completed memorial to the 184 people killed at the Pentagon on Sept. 11, 2001 is the nation's first 9/11 memorial.)

For Moose, Sept. 11, 2001 was a flurry of phone calls, the first of which came in from the Mother of All Moosians at around 9:15, as Moose lingered over the morning paper and a second cup of coffee. (She had been on campus late the night before, teaching a grad seminar.) "Well, I guess you know what happened," her mom said when she picked up the phone. "Apparently I don't," Moose replied. "What are you talking about?" The MoAM told her to turn on the television. She did and watched in horror as smoke filled the cerulean skies of Manhattan. She and her mom were still on the phone when reports of a jet plowing into the Pentagon were first broadcast. "Mom, I have to go," Moose said abruptly, seized by a sudden panic. "I have to find Goose." Goose had gone to campus for an 8 a.m. meeting that day. Moose's first impulse when she realized something terrible was unfolding so close to home was to find her, reach her, get her back safe to the house.

Moose spent the next 16 hours in her bathrobe, glued to the television and the telephone. A neighbor who worked downtown called in worried about her daughter at school in the suburbs. And to report that she could see the Pentagon in flames from her office. A friend from Oslo called, her usually restrained Nordic voice filled with emotion. "Europe is with you," she told Moose. "We are watching, and we are with you." Something about that call -- those words, that small, intimate acknowledgment of the global significance of what was happening, got to Moose, momentarily unhinging her. When her younger sister phoned in from Michigan a few minutes later, all she could do was cry and say, "What am I supposed to do? I feel like World War III is breaking out, and it's already five miles from my house." "I know," her sister comfortingly replied, "I know." It was all that could have been said.

Goose didn't get home until late in the afternoon, ordered to stay on campus by the authorities at Queer the Turtle U., who sensibly decided it wouldn't be wise to send all the grown-ups home and leave the students alone on campus. She and Moose were on the phone when office workers were leaping out of windows in the World Trade Center. They were still talking when the first of the towers fell. "What do you mean, the tower is falling?" Goose said, unable to imagine such a thing could happen.

But it did. Seven years later, Roxie's World pauses to remember that the unimaginable can happen on an achingly beautiful autumn morning. The world can change in an instant. Individual lives can be lost, shattered, or merely transformed. And all you can say is, "I know."

Be safe, beloveds. Remember that dog is with you, today and every day. Peace out.
Posted by Roxie Smith Lindemann at 10:05 AM

Email ThisBlogThis!Share to TwitterShare to FacebookShare to Pinterest
Labels: love