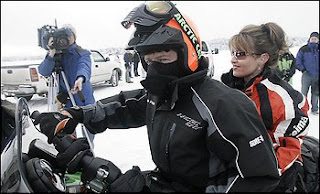 Could you in your wildest dreams have imagined that anyone or anything could come along and suck the political oxygen away from Barack Obama in the 2008 presidential campaign? Be honest. Could you? Did you? Do you? If you are a Democrat and you're still answering no to those questions, then you'd better wake up. De-nial, as they say, is not just a river, but you'd better hope somebody in the party of Dukakis, Gore, and Kerry has a strong paddle to help navigate the suddenly roiling waters of campaign '08.

Former San Francisco mayor Willie Brown (by way of Anglachel) gets what has happened to the race since John McCain selected Alaska Governor Sarah Palin to be his running-mate, and he is sounding the alarms for Democrats:

Palin's speech to the GOP National Convention on Wednesday has set it up so that the Republicans are now on offense and Democrats are on defense. And we don't do well on defense.

Suddenly, Palin and John McCain are the mavericks and Barack Obama and Joe Biden are the status quo, in a year when you don't want to be seen as defending the status quo.

From taxes to oil drilling, Democrats are now going to have to start explaining their positions.

Whenever you start having to explain things, you're on defense.

I actually went back and watched Palin's speech a second time. I didn't go to sleep until 1:30 a.m. I had to make sure I got the lines right.

Her timing was exquisite. She didn't linger with applause, but instead launched into line after line of attack, slipping the knives in with every smile and joke.

And she delivered it like she was just BS-ing on the street with the meter maid.

She didn't have to prove she was "of the people." She really is the people.

It's true that not everyone in Roxie's World appreciated how effective Palin's convention speech was while we were watching it Wednesday night (okay, Goose, you were right and we were wrong), but we felt all along that Palin was a cagey pick whose political skills and value to the McCain campaign should not be underestimated. We also felt that the "progressive" blogosphere and the media's ganging up on the candidate and her family over the pregnancy of 17-year-old Bristol was a mistake that would end up generating sympathy for the Palins and do damage to Obama, no matter how much he tried to distance himself from the stone-throwers. As of today, Obama's post-convention bounce has disappeared, and polls show the race pretty much dead even. We rest our case.

Sarah Palin is a problem for Democrats for all kinds of reasons. Her presence on the ticket is a constant reminder of the proven vote-getter whom Barack Obama passed over for the second spot on his ticket, Senator Hillary Clinton. McCain's surprise pick also, as many observers have noted, gives him an opening to voters hungry for change in this election. Suddenly, the old geezer in the race offers his own version of the iPhone: a fresh and undeniably pretty face, a promise of bipartisan reform, an opportunity for voters to make history by putting a woman into the executive branch. The Republican brand, which five minutes ago seemed as stale as month-old bread, now seems new again, almost even hip. (Note that we said seems, people, not is. This is a game of appearances and perceptions, not realities.)

But here is something we think Dems are missing about Sarah Palin and a sizable chunk of voters to whom she is likely to appeal. Secular Democrats have a caricature of evangelical Christians in their heads as grim, repressive naysayers who spend their lives tuning out the obscenities of the modern world and working frantically to assure that nobody anywhere ever has any fun. They are mean, punitive, ignorant, intolerant. They homeschool their kids, wear drab clothes, and imagine that dinosaurs and Jesus roamed the earth together. Such pinched, sober individuals and faith communities no doubt exist, but the hip, sunny face of postmodern fundamentalism presented by the Palin family is clearly not anomalous. The chick gov and her hunky first dude are the cool Christians next door -- the attractive, fun couple who look like they are ready and waiting for Annie Leibovitz to show up and take their photo for the cover of Vanity Fair and who likely won't show up at the neighborhood potluck with a Pyrex dish full of day-glo Jello. They may go to prayer meetings on Wednesday night, but it's easy to imagine they race home to be on the couch in time for Project Runway. Their faith is not an oppressive force that keeps them remote from the world but a source of deep pleasure and consolation that helps them make their way through it. "Shit happens," we say in secular-ville. "Sin happens," say many contemporary fundies. Either way, it's not that big a deal. Smile. Carry on. Stand up for and with your family. No scarlet letters necessary, thank you.

George Lakoff has written brilliantly on the Palin selection because he understands what many Dems still do not -- that Gov. Palin and her large, telegenic, imperfect yet seemingly happy family are the embodiment of what Lakoff has termed "bi-conceptualism." (The concept is mapped out in detail in an excerpt from Lakoff's 2006 book, Thinking Points: Communicating Our American Values and Vision.) The concept gets at the mixture of conservative and progressive modes of thought and systems of value that are at the heart of conservative populism the Republican party has been successfully deploying since Ronald Reagan to win over especially working-class voters. As Lakoff puts it in his piece on Palin:

A great many working-class folks are what I call "bi-conceptual," that is, they are split between conservative and progressive modes of thought. Conservative on patriotism and certain social and family issues, which they have been led to see as "moral," progressive in loving the land, living in communities of care, and practical kitchen table issues like mortgages, health care, wages, retirement, and so on.

Conservative theorists won them over in two ways: inventing and promulgating the idea of "liberal elite" and focusing campaigns on social and family issues. They have been doing this for many years and have changed a lot of brains through repetition. Palin will appeal strongly to conservative populists, attacking Obama and Biden as pointy-headed, tax-and-spend, latte liberals. The tactic is to divert attention from difficult realities to powerful symbolism.

Lakoff's advice to Dems is to focus on realities without overlooking the important domain of the cognitive and the symbolic. They have to appeal to voters' sense of values, and to do that they need to understand the complex and seemingly contradictory admixture of values operating in voters' minds all across the political spectrum. In our judgment, the most damaging moment of Gov. Palin's speech the other night for Democrats was when she lambasted Obama for an April incident that has come to be known as "Bittergate":

in small towns, we don't quite know what to make of a candidate who lavishes praise on working people when they are listening, and then talks about how bitterly they cling to their religion and guns when those people aren't listening.

We tend to prefer candidates who don't talk about us one way in Scranton and another way in San Francisco.

Democrats may deplore the fact that large swaths of voters can be taken in by the crude antithesis of Scranton and San Francisco, but it remains a devastatingly effective way to portray Democratic candidates as elite, effete, and scornful of "mainstream" mores and values. Palin's populism appeals not only to Republican base voters who would probably never vote Democratic but also to more middle-of-the-road voters who distrust any whiff of hypocrisy and condescension. Such distrust is as American as apple pie, and Democrats can't ignore it or complain that it isn't fair. They have to dislodge the perception or counter it with another, more powerful perception aimed, perhaps, at pointing out the more consequential hypocrisy of a party that has repeatedly sold out working people through economic policies that have systematically redistributed wealth upwards. Palin's FUN-damentalism might then look a whole lot less fun to voters, but it remains to be seen if Barack Obama can change the game yet again and get his offense back out on the field. He better hurry, because, right now, Sarah-cuda is having the time of her life out there, and time is running out.