Huge pre-debate crowd this evening at Ishmael's, the cozy yet seedy bar just around the corner from the global headquarters of RW Enterprises, LLC. Innkeeper Peter Coffin has Depression-era cocktails on half-price special tonight, his clever effort to capitalize on the crisis in the financial markets. There's (Half-)Baked Alaska on the dessert menu in honor of Governor Sarah Palin, and if our crack team of culinary researchers had been able to turn up any evidence that Senator Biden's home state of Delaware had ever contributed anything worth eating, we'd have put it on the appetizer menu. Best we could come up with was the winner of a 1997 contest for the best crab cake recipe, but that won't do. Roxie's World is in Maryland, people. We ain't puttin' no damn Delaware crab cakes on the bar menu!

The crowd is settling in. Peter's got the new plasma TVs turned on to Ugly Betty because none of the regulars can stand Keith Olbermann. There's a lot going on. One group is huddled around a laptop playing a lively game of Palin Bingo: 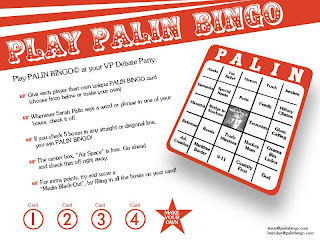 In the back room, where there's a rickety old stage, a bunch of grad students (the moody kids in dark glasses, as Peter thinks of them) are holding a poetry slam. They are doing choral readings of The Poetry of Sarah Palin, a stunning new collection put together by noted literary scholar Hart Seely and published just yesterday in Slate (H/T to Eitan). Seely pored over the transcripts of Palin's recent interviews and discovered therein some of the most extraordinary found poetry since somebody opened Emily Dickinson's desk drawer. (Goose would object to this comparison, but she is out of town tonight, so there.) The grad students don't have Tina Fey's gift for mimicking Palin's voice, but they've got a feeling for the poetry and a teacher's passion for reading aloud, so imagine their stirring performances of Palin's "poems" (as compiled by Seely):

"On Good and Evil"

It is obvious to me
Who the good guys are in this one
And who the bad guys are.
The bad guys are the ones
Who say Israel is a stinking corpse,
And should be wiped off
The face of the earth.

That's not a good guy.

You can't blink.
You have to be wired
In a way of being
So committed to the mission,

The mission that we're on,
Reform of this country,
And victory in the war,
You can't blink.

So I didn't blink.

You really must run over to Slate and read the rest of Palin's poems. "Small Mayors" will make you weep from the intensity of compressed emotion and meaning. I defy you to get through it without shedding a tear. Moose is going to try to talk Goose and the Candy Man into doing a special seminar on the collection once the election is over.

Finally, Moose and Mark Twain are deep in conversation at the bar, trying to formulate rules for the drinking game they'll be running during the debate. They've come up with a few, but we invite you all to add more in comments. Consider this an open thread, kids. We're not clever enough to live-blog, but if we all hang out here together, won't that amount to pretty much the same thing?

1. Every time Palin drops a "g" on the end of a word, drink -- but just take a tiny sip or you will end up with alcohol poisonin' before all is said and done.

2. Every time somebody says "Hillary Clinton," take a healthy swig and raise your glass to the girl who almost made it.

3. Every time Joe Biden smiles so big you think his face is going to crack right open, take two drinks and tell Peter you really wish he had crab cakes on the menu.

4. Every time somebody mentions George Bush in a positive context, take the biggest drink of your life, because it may be your only chance.

5. Every time somebody mentions feeling the pain of single moms and middle-class homeowners and parents trying to get their kids through college, use one hand to raise your glass and another to cover your wallet, because you'll be the one paying for that bailout. Even if you'd rather say "thanks, but no thanks" to it.

Your turn, kids. Send us your rules, and tell us what your drinkin'. Peter is ready to serve.
Posted by Roxie Smith Lindemann at 7:54 PM