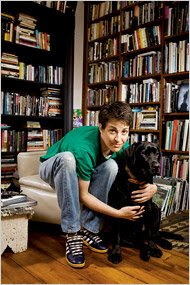 For the Short-Haired Women of Roxie’s World, with love from Moose, who has been sitting in the red chair with her eyes closed ever since she read the recent NYT magazine interview with MSNBC’s Rachel Maddow, known in these precincts as Butch PhD. Go read the latest charm blast from the tough girl who has suddenly stolen the heart of the reality-based community. Then come back here and add to the following list of reasons she should stop by and see us sometime. Please, kids. Moose has got it bad. You gotta get her some relief.

1. She identifies with Wally Cleaver “cause he’s a dork.” We identify with the Beaver cause, um, cause, well, call us, Rache, and we’ll tell you about it in salacious detail.

2. Her favorite item in her house is a sculpture of a big fat squirrel holding a reflector. Our favorite item in our house is a bright red and yellow plastic statue of an Eskimo girl used to advertise ice cream in Norway. It was stolen for us by law-abiding Norwegians and shipped to the United States as “scientific equipment.” That's how cool we are, Rache. We can lure Norwegians to ship stolen property overseas just to make us happy.

3. She likes playing bartender. She researches classic drinks from the golden age of American cocktails and makes them for herself and her girlfriend. We hang out in an imaginary bar tended by a guy named Peter Coffin who hosts themed happy hours with half-price specials on classic cocktails. But we do have an actual liquor cabinet in our house and some very sexy cocktail glasses.

4. She has a handkerchief fetish. We have moist, um, noses.

5. She cleans to avoid writing. We get dirty to avoid everything else. Come clean us up, please.

6. She jokes that maybe all the other pundits are hanging out together and not inviting her. We know that all the other bloggers are hanging out together and not inviting us. Who needs any of ‘em, Rache? Let’s hang out with each other and trash all the muckety-mucks of TV-land and Left Blogistan who are so much less talented and brilliant than we are.

7. She wears contact lenses and dresses like an assistant principal in order to be on television. One of the denizens of Roxie’s World wears contacts and thinks she needs to be sent to the principal’s office for acting up in class again the other day. She kinda hopes Principal Maddow is an advocate of corporal punishment. Ow, baby.

8. She has a fishing pole. We have a pond. With a waterfall and exactly one fish. Goose won't let you catch it, but just pretending to fish can be a lot of fun.

9. She is on television but does not own a television. We have a ridiculously large television with a fantasy channel that broadcasts Rachel-porn 24//7. What is Rachel-porn? It involves handkerchiefs, sneakers, rulers, dark-framed glasses, and clever banter in an alto voice on an astonishing array of subjects.

10. She loves lawn mowers. We have a lawn. A big, lush, undulating lawn badly in need of attention. You might want to bring along your pruners and loppers, too, Rache. Our lawn can be hard to control. Bring mulch. And a bottle of that Rhum Agricole stuff you like so much. Once you’ve disciplined the lawn, Moose thinks it would be nice to have cocktails down by the pond. With your girlfriend, of course. And Goose. And me. And that big black lab you’re snuggling with in the photo. I think we’d all get along famously.

Still not convinced? If you won't listen to us, perhaps you'll listen to the Boss. We'll give him the last word today. He knows what it means to be in thrall to a woman who doesn't even know you're alive. Poor Bruce! Poor Moose! Poor humanity!