The Tourist as Bad Student

Friday was a low-key day, touring-wise. Goose is embroiled in the conference, and the weather has been iffy with a typhoon, or rumors of a typhoon, somewhere in the area. The air is thick enough to slice, and the sky looks like it will explode at any moment, so the affable economist and I decided to keep things simple and just do an afternoon tour of the Kyoto Imperial Palace, conveniently located in a large, lovely park right across the street from our hotel. Our simple plan required not one but three trips through the park -- the first to ascertain that we could get a permit to join a tour that day, the second to actually get the permit, which we couldn't get on the first trip because someone neglected to bring her passport along (not realizing that proof of identity was necessary for a walk through a park), and the third for the tour itself, which turned out to be not an intimate look at the inner world of the palace but, as I said, a walk through the park that allowed distant views through the open doors of the palace.

When I realized that was all we were getting, I have to confess I sort of checked out on what the tour guide was saying and started scouting around for photo opportunities, keeping in mind my obligations to the loyal readers of Roxie's World. (I know it's late on the East Coast, and you haven't had your update yet today. Inexperienced as I am as a blogger, I feel your restless fingers out there, clicking on reload again and again, eager for your fix. Now I appreciate the pressure poor Roxie has felt in the past 18 months, the pressure of all that concentrated longing. Gosh, Rox, I don't know how you handle it.) Anyway, as I wandered around looking high and low for potential sources of eye candy, the guide's words occasionally landed in my brain, much as the words of Charlie Brown's school teacher would reach him from time to time. Here's a little sample of what was going on in my mind as the tour unfolded:

You get the drift. See for yourself whether my lack of concentration resulted in decent photographs.

Last night was the conference banquet, our second night in a row of a full-on traditional Japanese feast. I can't begin to recapitulate how many courses we had or what we ate, mostly because I often had no clear sense of what it was I was putting into my mouth, despite attentive and eager-to-explain Japanese table mates. Suffice it to say the meal involved small portions of everything but cheese and was mostly delicious. One Japanese custom around the rituals of eating and drinking that has impressed me is the one about re-filling drinks. You are never supposed to re-fill your own glass, because to do so implies that your dining companions aren't taking good care of you. As soon as your glass is half-empty, someone is likely to re-fill it. You are also never supposed to refuse a re-fill. If you're concerned about drinking too much, you just take tiny sips and try to assure that your glass stays at least half-full. (There's a half-empty, half-full joke in there somewhere, but I'm in too much of a hurry to make it.) Or, you just keep knocking them back to allow your dining companions to demonstrate how caring and attentive they are. Which is pretty much how I handled this crucial question of etiquette on foreign soil.

Saturday afternoon the conferees are liberated from the program to go touring. Goose and I will be off with Mary Loeffelholz to east Kyoto for temples, geishas, and shopping in more or less that order. More soon, fans, friends, family, and random pointers and clickers. May your glasses always be at least half-full. 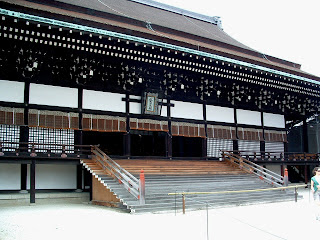 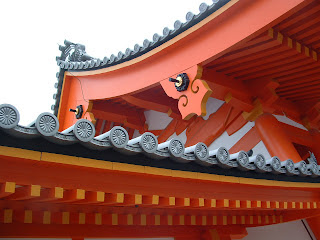 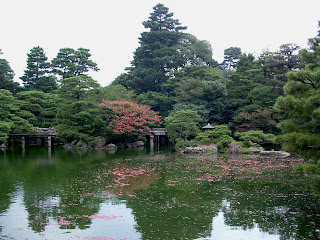 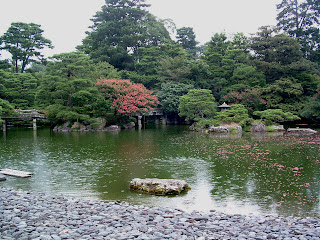 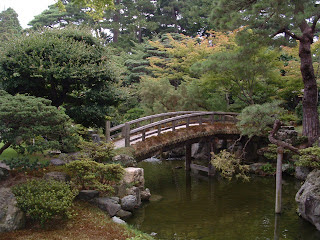