We’re in a rush, nearly an hour behind schedule because someone was up late blogging last night and then couldn’t fall asleep. We’re seated next to a “white” family but are focused on trying to figure out why we’re given lunch menus when the breakfast buffet is still out. We resolve that international puzzle and are tucking into our scrambled eggs when the woman next to us turns and says in a loud whisper, “It’s so nice to see non-Asians.” Yikes, we think, what is she assuming about us, and how do we respond to such an opening line? I think I took another bite of egg. Goose probably said something vague and noncommital like, “We’re pleased that it’s less humid here than it was in Kyoto.” Fortunately, a conversation ensued, and we quickly reached more comfortable ground. They were Dubliners, a mom, dad, and teenaged son just in the night before from Shanghai. They’ve been traveling for nearly a month. They are having the time of their lives, though the son seems a little road-weary and the mom thinks the Chinese are “pushy.” Dad, however, is wildly enthusiastic about China and insists we have to go there, and when we go we have to stay in Hyatts. “Hyatt is all over China,” he says, “and they’re wonderful. You have to go. China is where it’s at.” Dad is a little hard to understand, because his voice is soft and low, but his zeal for China is palpable. They’ll be staying in the Park Hyatt Tokyo on the 13th, the day we leave for home.

This close encounter is the first of this sort that we’ve had since we’ve been here, though I’ve noticed how often our glances momentarily lock on those of other “non-Asians” as we walk through the streets or sit on trains or see the sights. Perhaps it’s a reflex action, a natural response by members of a group accustomed to being in the majority who suddenly find themselves radically in the minority. Perhaps it’s another aspect of the “Nara-tology” problem I mused upon yesterday. When so much in a new environment is so deeply unfamiliar, like reaches toward like, even if the likeness proves to be superficial or based on error. I’m realizing, for example, that I was initially reading the “non-Asians” I was seeing as mostly Americans, but that is by no means the case. American tourists are far outnumbered here by Europeans, French and Germans in particular, and by Australians. Sameness and difference are shifting grounds, equally treacherous, equally uncertain, it turns out, in travel as in critical theory.

Straight couple in their mid-30s is behind us in line for the ferry. He’s worried that they need tickets to get on board, though they have passes from the rail company that runs the ferry. He’s worrying in a loud voice with a British accent. We turn and assure him that you don’t need tickets when there aren’t reserved seats. We’ve got the passes, too. We learned this lesson half an hour ago in the Hiroshima station and are pleased to pass it along to fellow travelers. His girlfriend has a British accent too -- kind of but not exactly. We chat with them for most of the short ferry ride. Where have you been? What have you done? How long are you here? They also stayed in the Park Hyatt Tokyo and were jealous to hear that we would be going back in a few days. The girlfriend, it turns out, is from San Antonio, Texas but has lived in London for the past three years. “Oh, sweetheart,” I wanted to say after knowing her for ten minutes, “what else are you hiding beneath that fake little voice of yours? Whatever it is, is it really worth all the effort you’re making to conceal it?”

Mom in her mid-thirties is traveling with her daughter, who looks to be around six. They are seated facing us, speaking French. The kid is adorable. My heart melts. The train is crowded with day-trippers from Miyajima and assorted locals. A Japanese man with a cat in a carrier stands next to us and puts the cat carrier down on the floor. He engages the little girl’s attention by speaking to her and pointing out the cat. She is mesmerized, keeps tapping on the top of the carrier to get the cat to look at her. Suddenly, she looks over at me and asks if I speak French. “Oui,” I say, friendly but self-conscious about my rusty French, “un peu.” I ask her if she has a cat at home and she says she does, but he lives in the garden. Actually, Mom had to clarify that part for me. I have a hard time understanding the girl’s French. We have another version of the travelers’ chat, but this one feels warmer, probably because the kid is so cute and the cat gives all of us an excuse to smile and be silly. At some point we shift into English so that Goose can join the conversation (and I can stop asking the poor woman to repeat herself). Mom is a little uncertain about where their stop is, and they wind up exiting suddenly, a couple of stops before the main Hiroshima station. We barely have a chance to say good-bye, but when they reach the platform they turn back and wave. I’m not sure if they’re waving at us or at the cat, but we wave back enthusiastically. What’s funny to me is that I have found myself ready to lapse into French on several occasions on this trip, because it is wired into my limited brain as “the language that is not English.” I default into it whenever my main programming language doesn’t work. There it is again: the irresistible urge to find sameness within difference, to make the unfamiliar familiar. Oh, well. At least the French finally came in handy.

The trip is winding down now, kids. Tomorrow we’re off to Hakone for our night at a traditional Japanese inn (with thermal baths), then back to Tokyo for the last hurrah. Below are a few shots from Hiroshima and Miyajima. It was a little jarring to move from the somberness of Hiroshima to the loveliness of Miyajima, but part of what one takes away from Hiroshima’s Peace Memorial Park and Museum is the value and necessity of finding (or building) beauty after ruin, so perhaps the contradiction between the two places isn’t as jarring as it seems. In any case, I won’t touch the subjects of war, peace, and nuclear weaponry, at least not here, not tonight. It’s late, and this weary traveler needs to get some sleep. I’ll let Goose pop off on those topics in Comments.

Love to all,
Moose 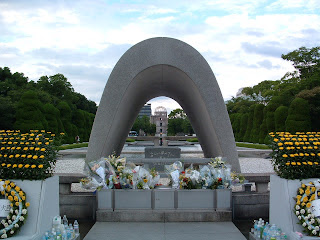 A-Bomb Dome (formerly Hiroshima's Industrial Promotion Hall, this building was directly below the atomic bomb blast but did not collapse) 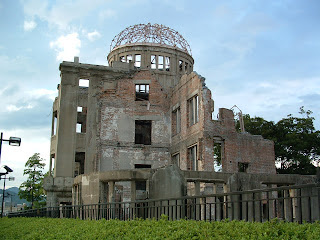 O-torii ("big gate"), Miyajima (not quite high tide, so the "floating" effect is incomplete) 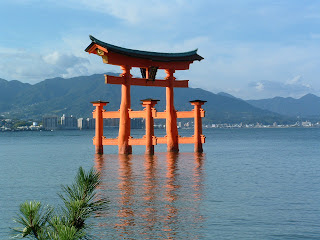 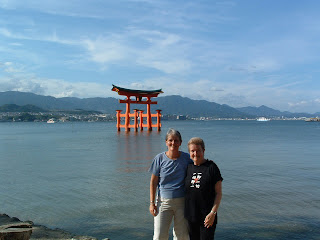 Posted by Roxie Smith Lindemann at 11:04 AM