Land of the Rising Sun

[Prescript: Sorry for the delay between posts. Did you miss me? We had a day of travel on Thursday and were off the grid while at the Mikawaya Ryokan (traditional inn) in Hakone. We got back to Tokyo late yesterday afternoon and have been on a whirlwind of pleasure ever since. Except for Traveler’s Nightmare #742B: Camera Battery Death While Trying to Take Most Gorgeous Vacation Snapshot Ever, everything has gone beautifully. We leave here a little after 11 on Monday morning and by that miracle known as the curvature of the earth will arrive back in Washington about a half an hour before we left Tokyo. Don’t think about it too much, Rox. It will only make your head hurt.]

Call it the upside of insomnia. Yesterday I woke up at 4:30 in the morning, as the first streaks of dawn made their way through the curtains of our east-facing windows in the mountains near Hakone. (It’s weird. After nearly two weeks here, we still have a tendency to burst into wakefulness in that hour between 3:30 and 4:30 in the morning. The body can’t seem to let go of the idea that it’s the middle of the afternoon and surely we ought to be doing something productive.) At 5 I gave up and got out of bed, figuring at least maybe I’d get a good photo op out of the deal. (Oh, perhaps it’s the mind that can’t give up on the idea that we ought to be doing something productive.) I picked up my camera, stepped out on the balcony, and here’s what I saw: 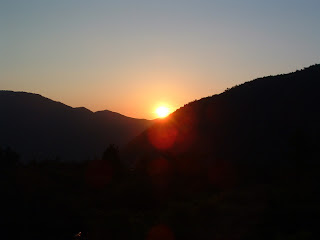 A few minutes later I looked down to my right and saw a woman doing t’ai-chi on her balcony on the floor below. She had the incredibly graceful, cat-like combination of agility and softness my teacher always tried to guide us toward during my t’ai-chi years. I watched her until I began to feel guilty for intruding on the privacy of her lovely embrace of the morning. Goose joined me on the balcony around 5:30, and we shared a sunrise for the first time in many, many years.

This morning, back in Tokyo, we worked the early shift again, rising at 4 (I swear you read that right) to go to the famed fish market at Tsukiji, where fish is sold at auction to wholesalers in one of the most extraordinary spectacles I have ever seen. (Read about the market here.) We stood for close to an hour watching men (and the world of the fish auction is a manly world indeed) walk through long rows of frozen tuna, flashlight in one hand, awl in the other, inspecting the merchandise and in some cases tasting it. At 5:30 on the dot, three auctioneers mounted small stools at the front of the vast, chilly room, started ringing bells, and then began the auction. The auctioneers at work were like spoken-word artists or rappers or preachers possessed by the spirit. There was an amazing verbal and physical energy to their performances -- and performances they were. Even though they were conducting separate auctions, their movements, though lightning fast, seemed almost perfectly synchronized. Had they been dancers in a Broadway show, their number would have been a show-stopper. I can't do justice to the experience. Perhaps it's enough to say that it was worth getting up at 4 o'clock in the morning to see it! And because of the aforementioned battery failure, I didn't have my camera with me either, so I've "borrowed" some photos from National Geographic so you can see what the market looks like. These images are amazingly like what we saw this morning. 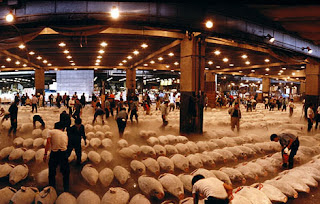 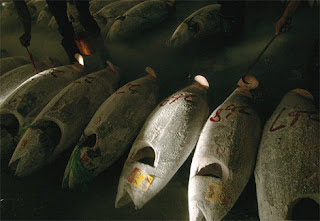 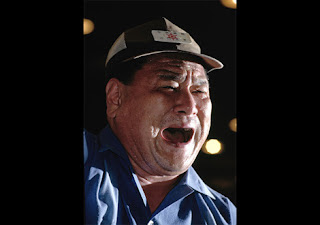 There is so much more to tell about the past two days, which have been full of so much bliss on so many levels. This is not the long, richly detailed post I wanted to write, but it's the one I was able to produce at the end of a day that began at 4 a.m. yesterday. More soon, I hope, before this humble English prof returns Roxie's World to its sole owner and proprietor.

Love to all,
Moose

P.S. to Rox and all her terrier fans: Thought you would like to see this photo of what looks for all the world like an ancient Japanese terrier, which I managed to snap yesterday in the Tokyo National Museum before I got yelled at for using my flash. Sure looks like a fox to me, don't you think? I'll let Roxie and her new pal Foxy weigh in on this vital matter of history and lineage, but I think it proves what we fox folk have always known: Terriers RULE! 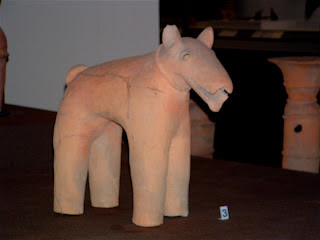 Posted by Roxie Smith Lindemann at 11:22 AM