Our perfect last day in Tokyo began with running into the Dubliners (the Irish family we breakfasted with at the ANA Hotel in Hiroshima) as we were on our way to breakfast. They had come to Tokyo a day early, and we had stayed at the Park Hyatt a day longer than planned. We're staying on the same floor and practically smacked into each other in front of the elevators. I told Goose it reminded me of all those leisure-class travelers in Edith Wharton novels who keep bumping into each other as they make their way from one European watering hole to another, except that we're much nicer people with serious commitments and rich, full inner lives, despite my long-standing identification with the barbarian Indiana Frusk, the most brilliantly named character in all of literature, in my humble opinion. Anyway, the Dubliners were quite delighted to see us, and we were pleased to see them as well. It is funny the fleeting intimacies one manages to establish with complete strangers in situations such as this. In almost any other set of circumstances, we would never have seen each other, much less spoken, but I believed the garrulous Irish dad when he said they had been talking about us over their breakfast and wishing our time here would have overlapped.

After breakfast, we went out for a last bit of sightseeing and shopping. We stayed relatively close to "home" and enjoyed the Sunday rituals of downtown Tokyo: a stroll through the Meiji Shrine and gardens; a visit to the scene on the Harajuku Bridge, where mostly teenage girls hang out dressed as their favorite "Manga" characters (it's an anime thing, for the un-cool [like me] among you); and some shopping and cafe-sitting on the broad boulevard of Omotesando. It was a delightful afternoon, though a beastly hot one, and we were able to pick up some gifts and souvenirs, including a sweet little sake set, because the sake-seeking Bostonian finally convinced me this is a beverage worth drinking. Occasionally.

I could write a long, scholarly article on the topsy-turviness of sex and gender on the Harajuku Bridge, which would be full of profound insights into queer youth cultures around the world, with the appropriate disclaimers about being careful not to impose Western analytical models on non-Western cultures and practices, but it's late and I still haven't packed, so I'm just going to toss up a few images and let the English profs and queer theorists work all that out in Comments.

This sweet-faced drag king deserves two shots, because s/he is just about the cutest thing I saw in the course of this long journey. 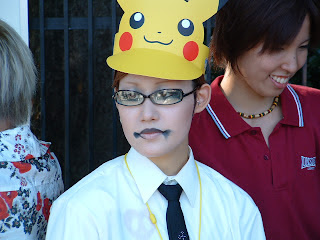 This drag queen was unusual in being one of the few -- perhaps the only -- adult who was participating in the scene. S/he was also totally mugging for the camera, which the kids weren't doing for the most part, though most would pose if you asked them to (I didn't). They were hanging out, talking, goofing around, doing a lot of hugging. They weren't oblivious to the hordes of tourists taking photographs all around them, but it wasn't their main focus. For the drag queen, though, the scene was a major voguing opportunity: 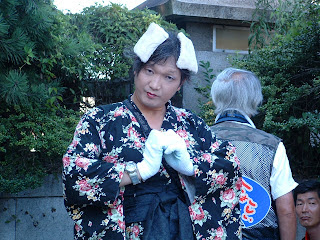 Because it was a perfect day, we caught a rare glimpse of Mount Fuji in the summer, which I photographed through the windows of the hotel because that was the only way to do it. Here's proof that dumb luck is the best kind to have: 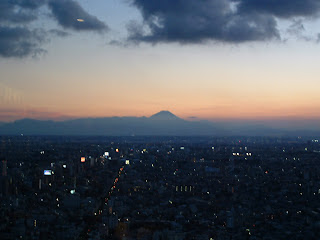 Our perfect day ended with a lovely dinner at the home of my sister Luanne's friend Laura in Roppongi Hills. Our thanks to Laura for her hospitality and great travel advice throughout our trip. And thanks to all of you for your company on this journey. You've been delightful companions and a generous audience for the maiden efforts of this inexperienced blogger. I look forward to returning to my regular role as mere amanuensis for the creative genius behind Roxie's World, whose beautiful brown eyes I can hardly wait to see. Be patient, Rox. The moms are headed home.

Love to all,
Moose
Posted by Roxie Smith Lindemann at 11:00 AM