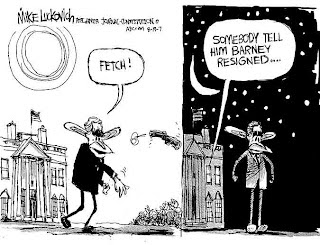 It's too hot to endorse Hillary Clinton today, kids. It's even too hot to get hot and bothered over Clinton's suggestion that terrorism could still be an advantage to Republican candidates in the upcoming election. (You can see the video of Clinton's fairly innocuous remark here.)

I suppose I could crank up some righteous indignation on the evil Karl Rove taking a pot shot at presidential terrier Barney on his way out the door, calling the poor little guy "a lump" who many people see as "aloof and entitled," according to NYT. Boy, if that's not the pot calling the kettle black! White House spokesperson Dana Perino came to Barney's defense on NPR's quiz show, Wait Wait. . .Don't Tell Me! according to Wa Po, but the defense strikes me as half-hearted. "Look," Perino is reported to have said, "Barney is kind of standoffish, but he's got personality. He's got a little bit of sass. You know, I don't think -- he doesn't let people get too close to him." With friends like that, Barney might as well be, you know, the prime minister of Iraq or something. If I lived in the White House with this crew of nincompoops and meanies, I think I'd be a little standoffish, too. Call me, Barney. I'm here for you.

Should we give a paws up to the National Football League for suspending quarterback Michael Vick "indefinitely" after he pleaded guilty to being involved in an illegal dogfighting venture? Nah. The league did what it had to do in the face of a public relations disaster, but is clearly keeping the door open to Vick returning to the game at some point in the future. Wa Po sports columnist Michael Wilbon says today he's okay with that, as long as Vick "pays his debt to society," though Wilbon completely condemns Vick's actions and his failure thus far to accept responsibility for them. Roxie's World doesn't think Vick should ever be allowed back in professional sports, despite the fact that football is mostly just a more refined version of dogfighting, without the guns and drownings, mostly.

It's so hot here in Roxie's World that my fish have burrowed deep into the mud on the bottom of our pond and are nowhere to be seen. It's so hot that a tired old dog doesn't want her four paws to touch the scorching surface of the observation deck that looks out over our ridiculously large back yard. It's so hot that Goose has taken a shower and Moose is sitting in a chair with her eyes closed, dreamily recalling a swimming pool high in the sky over a beautiful city thousands of miles away. She summons up an image of the body slicing through water and of the mind going quiet and still. The image is a respite from the "hot misblotted sunlight, critical light" of a brutal August afternoon.

Moose smiles. I nap beside her on the cool wood floor. The world beyond Roxie's World will have to fend for itself today.
Posted by Roxie Smith Lindemann at 12:13 PM