(Updated below the pic.)

Offered as a public service to readers following the story of Harvard professor Henry Louis "Skip" Gates Jr. being arrested and charged with disorderly conduct last week at his home in Cambridge, MA, which has now morphed into the story of President Barack Obama talking publicly about racial profiling in a manner that suggests he may be a black man. Which seems to have taken a number of people by surprise. I dunno, peeps. Sometimes I wonder whether those opposable thumbs y'all are equipped with really mean you are that much smarter than all the other creatures on dog's earth.

Anyway, here are more links, in addition to those we offered in Wednesday's post:
Blog pal Historiann has a few more links in her own roundup on the issue. Got more, kids? Put 'em in comments, and we'll happily pull 'em into an update later, the moms' weekend entertainment schedule permitting. Meantime, y'all remember to talk nice to police officers. Don't go gettin' all loud and tumultuous and end up in handcuffs -- unless, of course, that is part of your weekend entertainment schedule, you wild thing. If it is, well, darlin', then this eye candy is just for you. Peace out. 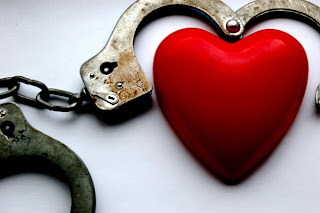 Here are a few more links, and then we'll have nothing more to say on the subject of the cop and the English prof. We think.