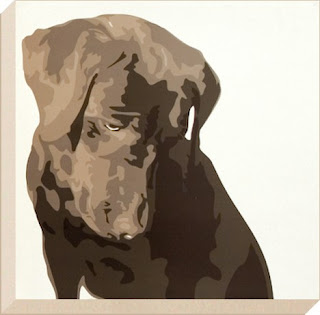 This post goes out in memory of my big beast of a cousin, Kona, warrior king of the remote kingdom of Indiana, who died yesterday after a sudden, brief illness -- an attack of pancreatitis, the same nasty disease that darn near killed yours truly three years ago. Kona was a beautiful chocolate lab -- serene, majestic, loyal, and large -- who presided over a large family and a hyperkinetic pack of chihuahuas with forbearance and quiet strength. When Moose visited his realm a couple of weeks ago, she smiled as she watched the big guy calmly patrol the grounds while the chihuahuas and the humans wreaked havoc around him, as chihuahuas and humans are wont to do. Kona was ten years old, born in 1999 on my very own birthday, April 1. Our condolences to the brother and sister-in-law of the Moosians and all of Kona's extended pack. We know your hearts feel broken right now, and our hearts go out to you.

After hearing the news about Kona yesterday, Moose ministered to me this morning with even more tenderness than usual. She fussed with my eyes, determined to rid them of the icky sticky gunk that spreads like kudzu every night while she's asleep. We ended up in the shower in something that felt a little bit like a massage and a little bit like a wrestling match as she searched for the right balance of gentleness and force in the effort to get me clean without hurting my increasingly thin and fragile body. She washed and partly dried me, then placed me out on the deck to let a delightful morning sun take care of the rest. When I was dry, she brushed me out, delicately using the flea comb around my eyes and mouth to try to extricate the last of the icky sticky stuff. When finally she was finished, we gazed at one another. "I'm still here," I said. "I know," she said, "but now you're clean and pretty, too." "Satisfied?" "Always, silly old girl," she said with a laugh, "always perfectly satisfied with you." And I know she really meant it.

Save me a place up there in heaven, Kona, a soft place with a view of the pool and a big pack of chihuahuas off in the distance. You do the heavy lifting, I'll do the thinking, and the little guys, well, they can run in circles around us from now until the end of time.

Peace out, and we'll let Usher sing you off, just as he did that other guy the other day: