(Not) Skipping the Gates Story

Or, Reflections on the Troubling Afterlife of Images

The clever parenthetical in today’s post title is intended to signal ambivalence, doubt, hesitation about whether and how to approach the subject of Harvard professor Henry Louis “Skip” Gates Jr.’s bizarre arrest last week for the crime of entering his own home in Cambridge. Gates was charged with disorderly conduct after a neighbor had summoned police when she observed him and a driver who had brought him home from the airport trying to open the jammed front door of his house and assumed that a burglary was in progress. The driver, like Prof. Gates, is African American. Details on the arrest and Gates' perspective on it are here. The charges against Gates were subsequently dropped, perhaps because the folks in charge of Cambridge, MA realized that any other course of action would most likely result in the city becoming a wholly owned subsidiary of Henry Louis Gates Jr. Gates’ friend and colleague from the law school at Harvard, Charles Ogletree, was representing Gates in the matter.

Perhaps the only thing that needs to be said about the whole sorry ordeal has already been said by Daily Beast blogger Touré:

After the arrest of Skip Gates, the most important black academic in the country, we can put all that kumbaya we’re-post-racial crap in the toilet.

That’s because Malcolm X’s 40-year-old quote is still true: “What do you call a black man with a Ph.D.? A nigger.”

But perhaps there is a little more that might be said. Gates is an English prof, a hugely famous English prof. The moms don’t know him personally, but at least one of them has a nodding professional acquaintance with him and both have enormous respect for the work he has done building the discipline of African-American literary study. He is a towering figure, and not just because he has a named professorship at Harvard or because he has traced Oprah Winfrey’s family roots. No, Gates is a scholar as well as a celebrity whose body of critical and editorial work since the 1980s is impressive for its quality as well as its quantity. With works like The Signifiying Monkey, Gates helped to bring theory to the study of African-American literature, a move that, in the heyday of high theory in the 80s, was important in establishing the legitimacy of any new field in the humanities. His archival and editorial work helped to expand the field and the history of African-American literature through the recovery of lost texts such as Harriet Wilson’s Our Nig, an autobiographical novel of 1859 that Gates republished to great fanfare in 1982. He has won accolades, including a MacArthur genius award, and he has deserved them.

And that’s why we’ve chosen to illustrate a post related to a shameful violation of Gates’ dignity and privacy with this photograph of a genial-looking fellow surrounded by artifacts that betoken a long immersion in art and culture: 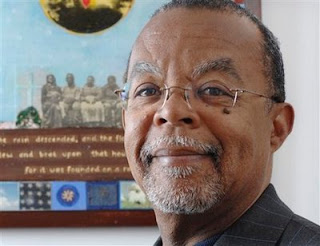 There are other photographs of Henry Louis Gates circulating this week. There is one of him handcuffed in his front yard, surrounded by three burly cops, one of whom is black. A white officer who towers over the professor has a beefy hand on Gates’ upper right arm. Gates’ mouth is wide open. Perhaps the camera captures him “exhibiting loud and tumultuous behavior,” as the arrest report puts it, the kind of behavior the arresting officer judged to be of “no legitimate purpose” and which he blamed for causing surprise and alarm among citizens passing by the location. Or perhaps it captures him exhibiting the terror and rage of a man followed into his own home by an officer of the law and then paraded in handcuffs before his neighbors for no good reason. Who knows? There are also, of course, the mug shots – or “booking photos,” as they are euphemistically being described in news reports. In the frontal view, Gates’ lips are tightly pursed; his eyes look off to the left. He refuses to meet the gaze of the camera that would pin him into the abject status of victim, turn him into just another black guy accused of a crime. His head is held high. He looks past the punitive lens in disgust, contemptuous of its aims and its authority.

You will not see those photographs in Roxie’s World. If you want to look at them, go here. We had a lively debate on whether or not to publish them here. On the one hand, they are compelling images that have significant documentary value. One could justify circulating them, painful as they are, on the grounds that this blog’s predominantly white audience needs to confront such appalling evidence of the persistence of racism in everyday life. If this can happen to Henry Louis Gates, a viewer would have to acknowledge, then it can happen to any black person anywhere. Such acknowledgments are worth making, particularly now, perhaps. The Age of Obama makes it far too easy for white Americans to imagine that, because the most sordid aspects of the nation’s racial history have been left behind, racism has also largely, magically disappeared. The photograph of Prof. Gates in handcuffs offers dramatic evidence to the contrary.

On the other hand, we couldn’t get past the fact that such images, no matter how carefully contextualized, perpetuate the public degradation of a man we greatly admire. Our critical commentary would do little, we worry, to offset the power of a perp shot to install its subject in a visual/cultural logic that is racist to its core in its assumptions about blackness, maleness, and criminality. That logic is so powerful that even a critical eye finds it hard to resist. Gazing at a mug shot, the eye of white privilege becomes the eye of Reagan attorney general Ed Meese, who famously declared that, “You don't have many suspects who are innocent of a crime. That's contradictory. If a person is innocent of a crime, then he is not a suspect.” Admit it. A mug shot makes any person look guilty, but it makes a black man look guiltier, scarier, more threatening. We felt we couldn’t escape or undo that terrible semiotics, and so we opted not to display those images of Prof. Gates here.

On the other other hand, we were pleased to see that Gates is vowing, in the wake of the incident, to focus on racial profiling and the criminal justice system in an upcoming documentary project. We applaud his determination to turn his ordeal into a public teachable moment and wonder if, within the context of such a project, Gates himself will choose to circulate the photographs of his arrest. We are happy to leave that choice to him and look forward to seeing how he will handle it. It looks as though the professor will have the last word on what happened one sunny afternoon in Cambridge, and that is as it should be. He will take back what the police briefly sought to deny him: his agency, his control over his person, his image, and his destiny. Such control may always be more limited than our naive national fantasies of autonomy and freedom imagine it to be, but Prof. Gates is as entitled to such fantasies as any other citizen of these United States. PAWS UP to you, Professor.

(With thanks to all our Facebook pals who posted links on this subject and to Goose, who walked and talked us through the eye-candy dilemma.)
Posted by Roxie Smith Lindemann at 12:26 PM