The Saucy Dogs of Ireland

And the Same-Sex Penguins of San Fran

These amusing bits of canine and penguin cultural history are brought to you by our beloved Candy Man, who, like so many of the English profs of Roxie's World, is off on the kind of international research mission that summer makes possible for hard-working scholar-teachers. Candy Man is in Dublin town this week, doing work at the National Library of Ireland -- I mean, you know, when he isn't shopping, dancing, Skyping, Facebooking, or trolling the internets searching for material for America's favorite dog blog devoted to politics, pop culture, and basketball. 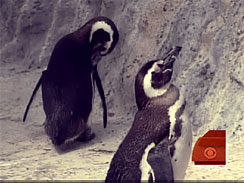 For example, yesterday he alerted us to this compelling tid-bit about Harry and Pepper, the same-sex pair of penguins at the San Francisco (of course) Zoo who recently separated after six years because Harry has taken up with a female penguin named Linda. Moose has spent much of the day sitting in her red chair contemplating a side-splitting post on the subject, imagining rival gay penguin organizations battling to spin the story of Harry and Pepper (and Linda) to their advantage. First, of course, there would be the wealthy, assimilationist Penguin Rights Campaign, which would send out its spokespenguin to claim that Harry and Pepper's relationship was clearly a casualty of California's Prop 8. "Harry was scared straight," Joe Penguinese would say somberly. "He couldn't stand up to the tide of social disapprobation he felt was unleashed by Prop 8. Same-sex penguin couples deserve and need the same kind of support, recognition, and protection that opposite-sex penguin couples get. We demand relationship equality now!" Meanwhile, down in the Castro, the rival Queer Penguins Opposed to Marriage denounced Penguinese as a neoliberal fascist and celebrated the breakup of Harry and Pepper as proof of the failure of homonormativity. QPOM spokesepenguin Michael Dugganstam said that Pepper had been liberated from false consciousness and would now be free to experience a much broader range of intimacies. "We welcome Pepper to the wild zone of queer relationality," Dugganstam said. "Marriage is for the meek and the unimaginative, and, besides, it shouldn't be tied to the distribution of benefits that all penguins should get regardless of relationship status. Economic justice now!" We would have written that post if Moose could have come up with a penguin equivalent to "God hates fags" to put on signs carried by foaming-at-the-mouth evangelical protesters who showed up at both press conferences. Any suggestions? "God hates flippers?" Nah, we didn't think so either.

Anyway, now it's Monday, so Candy Man was back in the library, poking around in a collection of 19th-century Irish songs called The Spirit of the Nation; or, “Land of the Green.” (Don't ask why, darlings. He's an English prof. They are, as I have told you many times, weird.) He ran across an amazing little ditty that so excited him, as the Official Poetry Geek of Roxie's World, that he raced back to his hotel to call Moose and tell her about it. (Fine, yes, he told her a bunch of other stuff, but he did eventually get around to telling her about the song, and they both squealed with delight over it.) The song is called "A New Song on the Saucy Dogs of Ireland," and, like much of Ireland's best music and poetry, it is a deeply political song, written to protest a great injustice -- in this case the injustice of a fine having been imposed on dogs for barking. (I know! Can you imagine?) Candy Man carefully copied out the verse of the song having to do with terriers, because, well, if you need to ask why you haven't been listening, have you? Here is the verse:

Then the terrier is a useful dog that always was well liked sir,

Stood up with anger in his eye, and spoke with all his might sir,

He snarled, marked and said, that a rat he’d never kill, sir,

Unless he’d see his comrades free from this obnoxious bill, sir.

We offer an enthusiastic PAWS UP to this eloquent tribute to the virtues of the terrier group -- Our skills as hunters, the deep affections we give and inspire, our extraordinary willfulness, and, of course, our ferocious commitment to justice for the pack. Nobody's free unless everybody's free! If we don't all hang together, we shall all hang separately! Free my comrades from this obnoxious bill, sir, or lose the services of the finest ratters on dog's earth! Sing it with me, all you saucy dogs and dog lovers and doggerel lovers, too!

Play us off, Candy Man, and come home soon. We miss you. 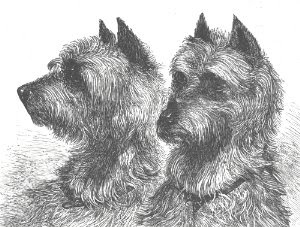