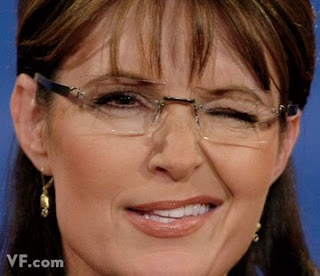 Lucky for you, citizens of Roxie’s World, that the madcap moose huntress of Wasilla decided to announce her resignation as governor of Alaska on the eve of the 4th of July. Sarah Palin’s stunning move derailed my typist’s plans for a moody holiday post on the overvaluation of independence in American culture. It would have been full of Deep Thoughts and poignant personal revelations, probably illustrated by copies of family photos she downloaded during her recent visit to her home state of Indiana. Screw that, she thought when she woke up this morning with visions of the long forgotten Sarah dancing once again in her brain. “Goose,” she declared, “you make the potato salad. Roxie and I need to update the Palineologisms, maybe bang out a fresh Palin-ode or two to mark the occasion.” “Aye, aye,” Goose dutifully replied. She makes the finest potato salad in all the land, and she far prefers funny posts to moody ones, so she was more than happy to oblige. Moose grabbed a cup of coffee and the laptop.

“PALINOSTOMY!” she shouted moments later. (Okay, technically, it was a couple of hours, but doesn’t that sound better?)

Noun (pl. –mies)
Elective surgery performed to remove a minor irritant on the bowel of the body politic. Generally performed to assure future viability of the organ, though risks of unforeseen complications are high. Patients may require extended period of recovery and rehabilitation.

My work is done and there’s no fun
In being just a lame duck
I’m so darn good it’s time to go
So long, voters – Good luck!

Want to make sure you’re locked and loaded for a fiery 4th of July debate on the soon to be ex-governor of Alaska? Here’s your ammo, kids. Click, aim, fire!
Hope your holiday is swell, patriots. It’s a beautiful day here in Roxie’s World, and we plan to spend it reflecting on the virtues of (in)dependence – by which we mean savoring all that connects us to one another and to you, our legions of loved ones and loyal fans. This day always makes us think of the great democratic bard of New Jersey, Mr. Bruce Springsteen, so we’ll let him sing us out, with a vision of the boardwalk and fireworks and the carnival life we never really left. Take it away, Boss.