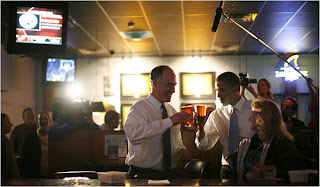 Don't you just love this touching photo of brand new BFFs Bob and Barack, just a couple o' workin' stiffs stoppin' off for a tall cold one at Sharky's Cafe of Latrobe, PA, where you can join the Mug Club and get your own custom-made 20 oz. mug and be eligible for all kinds of price breaks and special parties? Bob (that's PA Dem Sen Bob Casey) and Barack (that's IL Dem Sen and presidential candidate Barack Obama) stopped in Friday to celebrate their just announced marriage of political convenience. Bob realized over Easter that he was tired of sitting on the sidelines in the presidential race and so discovered his and America's true savior. He said of Obama, according to NYT, “I believe in this guy like I’ve never believed in a candidate in my life.” Jeez, Bob, then what took you so long? Meanwhile, Obama gets a helpful lift in PA, where Hillary Clinton has a sizable lead and endorsements from Gov. Ed Rendell and the influential Rep. John Murtha.

Too bad the guys stopped by Sharky's on a Friday. On Friday the drink special is Bud Light drafts for $1.75, the very thought of which makes Moose want to renounce alcohol and the country of her birth. If they'd stopped off on a Monday, they coulda slapped each other's backs over a Rolling Rock draft, which, until it was snatched up by evil Anheuser-Busch in 2006, was a decent beer actually brewed in the glass-lined tanks of Latrobe, PA. Bob and Barack coulda sat down at the bar and perhaps engaged that baffled, humble woman looking over her shoulder at them in a spirited conversation about the mysterious "33" printed on every bottle of Rolling Rock. When Moose and Goose were poor grad students back in New Jersey, they spent many a Friday night knocking back bottles of Rolling Rock and having precisely that conversation. They learned a lot on those beer-filled evenings about friendship, cheap food, and the value of nattering endlessly about not terribly significant things, such as whether "33" was an allusion to Prohibition (which was repealed in 1933) or to Freemasonry. (They never settled the matter. Then, somewhere in the mid-90s, they switched to wine and dropped the subject. And then they got a dog.) Wonder what Bob and Barack learned over their brewskis. Perhaps that you look like a big dork if you show up at a sports bar in Latrobe, PA in dress shirts so crisp they look as if they might break when you bend your arm to clink your best bud's glass?

So, kids, how are you surviving the lull, this dreadful period between the last set of primaries and the next one, when a bored, Barack-besotted national press and a panic-stricken, mostly Barack-besotted national party have joined in a deafening chorus of "Hillary must go, Hillary must stop, Hillary must quit, Hillary is ruining everything, Hillary is hurting our beautiful, our perfect yet apparently quite fragile Barack and so must be driven from the field, must stop stealing the votes that He deserves. She must go, or she must die. Yes, that's it. The bitch must die so that He may live and save us all."

Or words to that effect. Here in Roxie's World, we've taken refuge in basketball, as you might have noticed, though Goose is spending a fair amount of time writing out large checks, tearing them up, and enclosing them in indignant letters to Democratic leaders. The money quote from her latest to the Democratic National Committee: "The Party is so weak that it can’t abide a serious contest for its nomination for President . . . . I will not support a party that does not go out of its way to enfranchise fully all voters who wish to participate or who have participated and find their votes voided by a shortsighted rules enforcement." Tell 'em, Goose. Nobody does high dudgeon like our Goose, 'specially when a bunch o' guys are ganging up to sucker-punch a girl.

(Note to the Editorial Division: What's up with all the dropped word endings and beginnings in this post? I'm blaming my typist, who turned another year older this week and may be trying to sound like all the 23-year olds out there blogging in their underwear. Next thing you know, she'll be declaring that somebody's got some "splainin'" to do. Which a lot o' somebodies do, by the way.)

We're awfully impressed with Clinton's ability to withstand the pressure on her to step aside. We're not sure we could do it ourselves. We're also pleased to see some Dems standing up for Hillary and for the process. Props to Rendell, who sensibly asks citizens to imagine if the tables were turned:

“Just flip it for a second,” Mr. Rendell said. “Let’s say Senator Clinton was ahead by about 110 delegates and ahead by less than 1 percent of the vote cast, and she and her supporters started to call on Senator Obama to get out. Just picture what the media would be saying. They’d be saying you’re being racist, you’re being everything in the world. It’s nuts! It’s nuts!”

Then there's the ragin' Cajun James Carville, who continues to defend comparing Gov. Bill Richardson, who owes his political life to the Clintons, to Judas Iscariot for endorsing Obama last week. He has an op-ed in Wa Po today defending the insult and telling Democrats that if they can't handle his kind of straight talk they'll have helluva time handling McCain come fall.

Take a look at this New York mag piece by John Hellemann on the tense state of the race and its likely future course. It's got some interesting insights into why John Edwards hasn't gotten around to endorsing Obama. (Obama came across as glib and aloof in conversations with Edwards and his wife upon Edwards' withdrawal from the race and didn't seem serious about Edwards' pleas to make poverty a central part of his agenda. Clinton, on the other hand, did well with both Edwardses in their discussions.)

Know what, kids? It's late, and the most important thing on dog's green earth at this moment is that our beloved Lady Terps just prevailed over Vanderbilt in the Round of Sixteen! That's right, sports fans:

Kristi Toliver only had one turnover. Crystal Langhorne scored 28 points. And the Terps go on to the Elite Eight with an inspired performance likely to quell the talk that they didn't quite deserve that No. 1 seed. All is right in Roxie's World. Peace out, beloveds.

Postscript from the Department of Separated at Birth, which is up late still watching basketball): 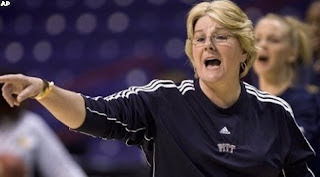 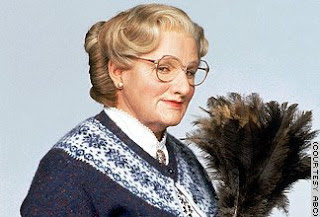