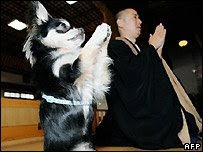 Hey, kids, it's time for another round of Caption This Photo. Tell us which one you like best:

1. Democrats are turning to a higher power to resolve the party's increasingly contentious battle for the presidential nomination. Today, party chair Howard Dean, speaker of the House Nancy Pelosi, and Senate majority leader Harry Reid met for two hours with Conan the praying chihuahua to see if he could help find another planet for Hillary Clinton to rule. "Please, Conan," Dean pleaded, "it's not like we can sit around and wait for voters to decide!"

2. New religious controversy engulfed the campaign of Senator Barack Obama today, as photographic evidence linking him to a cult of gay Japanese dog worshipers surfaced on the internets. Existence of video showing the dog barking, "God damn America," could not be confirmed at press time.

3. New sexual controversy engulfed the campaign of Senator Hillary Clinton today, as photographic evidence of former President Bill Clinton's latest sexual escapades surfaced in Japan. Existence of video showing Tokyo Bill forcefully asserting, "I did not have sexual relations with that chihuahua, Conan," could not be confirmed at press time, but former New York governor Eliot Spitzer has volunteered to chair a task force to investigate the incident. Said Spitzer, "I will doggedly examine every shred of evidence of the former president's shocking, shocking behavior."

We could go on, children, but we want you to get in on the fun. Continue, please, in comments. We'll award some kind of prize for the best suggested captions. We don't know what yet, but we're thinking. Promise.

Meantime, here's the real scoop on the amazing Conan the praying chihuahua, from the Associated Press:

By THE ASSOCIATED PRESS

NAHA, Japan (AP) -- At a Zen Buddhist temple in southern Japan, even the dog prays. Mimicking his master, priest Joei Yoshikuni, a 1 1/2-year-old black-and-white Chihuahua named Conan joins in the daily prayers at Naha's Shuri Kannondo temple, sitting up on his hind legs and putting his front paws together before the altar.

It took him only a few days to learn the motions, and now he is the talk of the town.

''Word has spread, and we are getting a lot more tourists,'' Yoshikuni said Monday.

Yoshikuni said Conan generally goes through his prayer routine at the temple in the capital of Japan's southern Okinawa prefecture (state) without prompting before his morning and evening meals.

''I think he saw me doing it all the time and got the idea to do it, too,'' Yoshikuni said.

The priest is now trying to teach him how to meditate.

''Basically, I am just trying to get him to sit still while I meditate,'' he explained. ''It's not like we can make him cross his legs.''

(With thanks to the Shy One, who knows how to make an old dog smile.)
Posted by Roxie Smith Lindemann at 10:02 PM