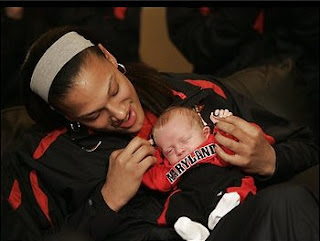 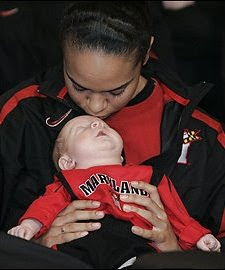 Well before the opening tipoff, our beloved Lady Terps of Maryland have emerged as the odds-on favorite to be the feel-good story of this year's NCAA women's basketball tournament. Why? Two words: goo goo and gaga. (Or is that three words? Four words? Zero "words" but excellent onomatopoetic imitations of baby noises? Where are those English profs when you need them?)

In a triumph of good timing and brilliant sports marketing, Maryland coach Brenda Frese gave birth to twins a month ago, which means that two adorable baby boys were available for bouncing on the knees of her adoring players during last night's tournament selection show. The sizable press contingent on hand to record the team's reaction to the announcement that the Terps would be a No. 1 seed for only the second time in program history briefly blew out the power in Frese's home, but the happy moment was thoroughly documented in an aww-inducing series of photos (see above). The littlest Terrapins were all decked out in matching Maryland togs, while their excited circle of muscular surrogate moms endeavored not to drop them when the surprising news was announced. (The team had been expecting a No. 2 seed after losing to Duke in the ACC tournament but edged out Stanford because of a strong non-conference schedule.)

As is often the case, Marissa "Shoulders" Coleman had some of the best comments on the off-court challenges of the evening. "It was nerve-wracking," Coleman said of her efforts to deal with the commotion, the news, and the bundle of joy in her lap. "I'm sweaty. I'm hot. I had to take care of the baby at the same time. I had a lot going on." Per usual, though, Coleman was up to the multi-task, as Kathy Orton reports in Wa Po:

"I'm a natural," Coleman said. "The nurturing mother part of me first came out when I saw the seed."

Of course, Markus wasn't sure what to make of all the commotion.

Roxie's World is officially beside itself with pride and joy for Shoulders and the whole Maryland crew, who richly deserve their No. 1 seed and all the giddy press coverage they are getting. We give a PAWS UP to anything that brings attention to women's sports and to one of the finest basketball programs in all the land. The doting maiden aunts of Roxie's World are also on board with the whole babies thing. They have already shown up at the Comcast Center with a hand-painted sign exhorting fans to Cheer the Twins and chuckle every time they recall Shoulders saying back in February that it was unfortunate for Duke to be playing the Terps "on the day our babies were born." (Feb. 17: Frese gave birth in the morning, and Maryland beat Duke 76-69 in Durham that afternoon.)

A small, cynical voice in the back of our fiercely loyal brains is muttering: Isn't all of this baby business just a convenient way to certify the heteronormativity of the Maryland women's basketball program and, by extension, of women's basketball generally? Doesn't it publicly declare that the Comcast Center is a family-friendly zone? Fear the turtle, we might say, but don't fear the lesbians because there aren't any here. Really. We swear. Coach B is a working mom with a devoted husband and two sets of grandparents ready to babysit come tournament time. The buzz before last year's NCAA tournament was the sudden resignation of LSU coach Pokey Chatman amid allegations of sexual misconduct with a former female player. The buzz this year is babies, babies, babies -- happy, healthy, heterosexually produced babies.

The point here is not to cast aspersions on Coach B, her family, or Maryland's impressive exploitation of a golden marketing opportunity. We don't even blame the media (in this instance) for jumping on a heartwarming story that is, after all, as much about Frese's dedication to her team as it is about her commitment to reproductive heterosexuality. We are thrilled to see Coach B back on the sidelines guiding the mighty women of Maryland in their pursuit of a second national championship. We just can't help noticing that everyone seems a little too eager to play the baby card, perhaps as a means of burying the lesbian card way down deep in the bottom of the pile. Women's sports has always been haunted by the specter of lesbianism, by the fear that athletic prowess undermines both femaleness and femininity. The figure of the predatory dyke in the locker room haunts the cultural imagination and shapes decisions about recruiting, hiring, and marketing in women's sports. Women athletes and coaches, whatever their sexualities, have a stake in exposing and rooting out the homophobia that underlies these attitudes and practices. We're tired of the silences, the evasions, and the repudiations of the lesbians and genderqueers in women's sports. You need us on your teams. You're desperate to have us in the stands. So stop pretending we're not there. Play the baby card, but don't deal the dykes out of the game. You'd sorely miss us if we were actually gone. (For some positive efforts to combat homophobia in women's sports, see the good work of the Women's Sports Foundation and of Pat Griffin, author of Strong Women, Deep Closets: Lesbians and Homophobia in Sport.)

Okay, off the soapbox and back to the business at hand: Cheer the Turtles, Baby -- We'll See You in Tampa!
Posted by Roxie Smith Lindemann at 10:40 AM