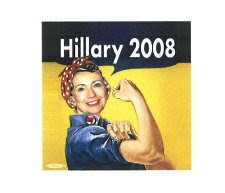 I'm not the only one, you know. There's a bunch of us out there, tapping quietly yet fervently away at our keyboards, scouring the internets looking for flattering pictures of the Girl Who Should Be President (as opposed to scary shots of the Monster Who Escaped from Hell to Torment Us With Visions of Universal Health Care). Don't believe me? Then run on over to Tom Watson to see his wonderful round-up of pro-Hillary bloggers. Go show some love to Tom and all the rest of the beleaguered band of laptop-lugging, linky-loving Clintonistas. Tom nicely captures the sense of what it feels like to be a part of this persecuted minority taking arms against a sea of hoped-up Obamaniacs:

To be a Clinton blogger in the progressive blogosphere is to be hated, shunned, passed without notice in the street. We sit home on Friday nights, cursing at Chris Matthews and being censored by Al Giordano for commenting too often in a field of swaying Obama supplication. We're not welcome at all the best dKos parties - if we show up, we're cursed with the universal epithet of those who challenge the Obama hegemony: "troll," they call us. Sometimes "f'ing troll." We're Rovian in our embrace of the monster, closet Bush backers and much worse - Lieberman types! Oh, the pain. The pure pain. I can't stand it. Makes me want to quit, embrace that messianic goodness, and stand down - for the sake of the party, of course - from any pursuit of a Clinton presidency.

There's also a blogroll of Bloggers Supporting Clinton at The Hillary 1000, a fundraising network that originated in Connecticut. We proudly note that Roxie's World is listed on the blogroll -- and we didn't even have to ask! Y'all might also want to check out a new blog pal, Historiann, who has made some pro-HRC comments here recently and holds forth smartly, wittily, and, um, historically, here.

A couple of non-bloggish links we don't want you to miss:
You won't hear a word from us this evening about the stunning mess New York Governor Eliot Spitzer finds himself in today after reports broke of his links to a prostitution ring. Well, okay, here's a word or three: Why is paying for sex illegal, when, if you think about it, that is really the basis of "traditional" marriage? Why is the federal government investigating a prostitution ring when, um, Osama Bin Laden is still at large? Why are men in public life, especially those who tend to go for the whole moral crusader thing, so darn dumb when it comes to the whole high-priced hooker in a hotel room thing? Guys, you are not invisible -- or invulnerable. What are you thinking?

Sleep on those questions tonight, gentle readers, and get back to us in the morning. 'Night-'night.
Posted by Roxie Smith Lindemann at 10:32 PM