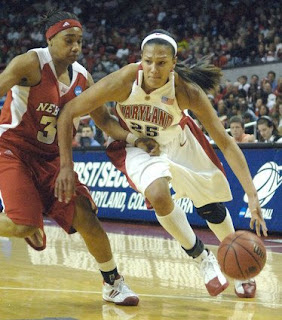 Our beloved Lady Terps gave the moms a late-night scare Tuesday at Comcast, blowing a 15-point first-half lead over Nebraska and looking for all the world as if they might manage to get eliminated from the NCAA tournament in the second round for the second straight year. They were saved from that ignominious ending to a thrilling season by yet another game-changing performance by junior guard Marissa "Shoulders" Coleman, who snapped her team out of its coma by ripping off 9 straight points early in the second half, including a 3-pointer that broke a tie and put Maryland in the lead for good. The Terps are now in Spokane, where they'll face off against Vanderbilt (24-8) in the Sweet Sixteen on Saturday night.

Milton Kent has a great send-off story in the Baltimore Sun that focuses on Coleman's determined effort on Tuesday and on Coach Brenda Frese's efforts to help her team banish the ghosts of last year's early exit. Coleman explains what the moms watched unfold on the Terps' sidelines as a fired-up Frese got up close and personal with her unfocused players:

"In the first half, I wasn't playing as well as I'd like to," said Coleman, who scored 15 of her 19 points in the second half. "Coach B [Brenda Frese] kept pulling me aside and motivating me. We wanted to get out of College Park. That's all we've kept talking about. I was getting the ball in the right places and being aggressive."

Our good friend Dog-Eared Book has abandoned loyalty to the institution that employs her in picking the Mighty Women of Maryland to win the whole tournament. We feel a certain responsibility for her choice and of course long with every fiber of our aching, aging beings for the Terps to snatch a second national championship, so this post, which we have no business writing today, is our own little kiss-for-luck to the dazzling child prodigies who are now all grown up and off in Spokane. We don't want to add to the pressure you feel as you make your way through the bracket, but we would like you to know that we all want to know what it feels like to be a part of a sports dynasty. We want you to be one of those teams that everybody loves to hate, that everybody expects, year in and year out, to be in the final four because that's just what they do. We want the name of Brenda Frese to inspire the same kind of awe and/or loathing that Pat Summitt, Mike Krzyzewski, and Bob Knight inspire. We want "Lady Terps" to be synonymous in the minds of basketball fans everywhere with greatness, with passionate, skilled play, and with selfless dedication to one's team.

But mostly, right now, we want you to focus like laser beams on how to contain Vanderbilt center Liz Sherwood on the defensive end of the court and how to get the ball inside to Crystal Langhorne on the offensive end. It's a 40-minute game. You need to concentrate for every second of those forty minutes to stay alive in this tournament and show the world what excellent heads you have on those gorgeous, strong, broad shoulders. We are with you, women, every step of the way. Go, Terps!
Posted by Roxie Smith Lindemann at 9:08 AM