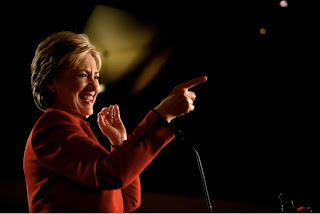 All right, all right, kids -- Go ahead. Mock us for predicting that Hillary Clinton would lose or not win big enough last night to justify staying in the race. Point your fingers at Moose's vaunted gut, source of so many of her judgments and decisions, and laugh hysterically at how far off base she was. Make your jokes about eating crow, even if Moose, technically, beat you to that in a comment she left here earlier today. Indeed, she even spent part of her busy afternoon on campus looking up crow recipes (oh, lord, we love the internets, don't we?), because, by golly, she'd be willing to tuck into a dish of the much maligned bird as a penance for her wildly off-target predictions. Assuming Goose would let her wash it down with a really nice bottle of something red. How about a bite or two of this simple yet hearty-sounding dish?

Preparation
Brown the crow breasts in a skillet with butter or oil. When browned, place them in a casserole dish on 1/2 inch layer of sauerkraut. Lay a 1/2 strip of bacon on each 1/2 breast and sprinkle the onion on them. Next, add another layer of sauerkraut and some of the juice. Bake at 350 degrees for 2 hours. Makes 2 servings.

Moose loves sauerkraut. It's all that German blood coursing in her veins. Would it be pathetic of her to point out that she was right about "Falling Slowly" from Once winning the Oscar for Best Song? She also had a hand in our prediction that Clinton would take California on Super Tuesday. Please, people, let the poor woman have some shred of dignity!

Seriously, folks, as you can imagine, we're pretty happy here at the Emily Litella School of Punditry and Prognostication to be saying a big, fat, loud, "Never mind," today. We smashed all the crystal balls in Roxie's World at about 1 o'clock this morning and are thinking of sending Moose to a doctor to have her gut checked, but seldom have we found ourselves so utterly delighted to have been publicly exposed as absolutely, positively, 100% spectacularly wrong. (That was a nice post, though, wasn't it? I bet anything more than one of you got choked up while reading it.)

By "we," of course, I mean me and Moose. Goose is exempt from this state of wrongness and public embarrassment, having been, as y'all well know and as she has reminded us several times today, confident that Clinton would do well enough in Texas and Ohio to continue her fight for the nomination. Indeed, she has a new name here in Roxie's World to honor her confidence and her dedication to the cause. (She made a bunch of phone calls for Senator Clinton while spending many long hours in the Dallas airport the other day, before finally stumbling in the door here at nearly 4 a.m.) We now humbly refer to her as the Girl Who Saved Texas. She had a little help in this endeavor, by the way. Goose's 88-year-old blind mother caucused for Hillary last night with her yellow-dog Dem pal Miriam. They and another friend were the first three people in line at their precinct for the caucus, and the precinct chairman thanked them, saying that his mother had desperately wanted to see Hillary Clinton become president but that she had died before she could cast a vote. Each of the women was born in the year women got the right to vote, and Goose's mom said she cried when she signed in at the precinct. Go on. Shed another little tear over that poignant detail. We won't tell anyone.

But enough about us and our rightness or wrongness, our bad guts and our busted crystal balls. What's the take-away from yesterday? What did we learn, and where do we go from here? We'll keep this short, because we've been burning the candle at both ends in Roxie's World this week, but here are some Rumsfeldian "snowflakes" on the current state of the Democratic primary race:
One more excuse for a happy dance in your living room: New WaPo/ABC poll shows Clinton and Obama both leading McCain in head-to-head match-ups. Watching him in his moment of triumph last night, we feel compelled to repeat that the man can make a victory speech sound like a prayer for a bowel movement. An unsuccessful prayer, by the way.

Oh, children, my typist is so tired that her head is falling over into the lap that holds the laptop. I feel the pressure of your collective desires for my wisdom on the subject of yesterday, and so I shall order her to press "publish" and get herself to bed before today is tomorrow and yesterday's news is too old to matter. Ah, my sweets, the tyranny of time in the blogosphere. How strange that even in this unreal (though lovely) world time waits for no man -- or dog. Peace out, beloveds. Sleep well. And heed your dreams.
Posted by Roxie Smith Lindemann at 7:23 PM