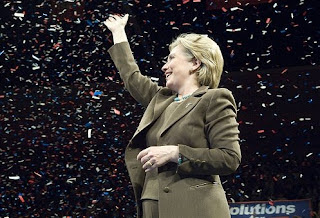 We’re one bitch shy of a full pack here in Roxie’s World this weekend, kids. Goose is down in Texas, being a big muckety-muck at some conference and trying to save the Lone Star state for Hillary Clinton. Meantime, back here on the couch, my typist and I are bracing ourselves for Tuesday. Again, Goose wouldn’t want us to say this, but our blogger’s oath to call a spade a spade compels us to say that we think Senator Clinton is going to lose (if only, alas, by not winning big enough) and could be out of the race by the end of this coming week. We hope we're wrong, but if we're right y'all come right back here for some major commiseration, okay?

(You may have noticed that the two English profs of Roxie’s World have significantly different theories about the relationship between language and reality. Goose’s theory boils down to her oft-repeated assertion that “People believe what you say about yourself.” So, in other words, if we say that Hillary Clinton is going to lose, we increase the likelihood of her doing so by contributing to the perception of her vulnerability or by upsetting some kind of karmic apple cart. To which Moose replies, “My gut tells me this is what’s coming, and I need to prepare for it. Saying a thing does not make it so [e.g., ‘Mission Accomplished’], and not saying it doesn’t prevent it from happening.” If we were philosophically inclined, we would probably have some fancy label for their different positions in this vexing doctrinal dispute [Goose = magical thinker? Moose = gritty realist?], but, fortunately, we are a humble dog blog and are therefore not obliged to put a paw into this particular pile of doo-doo.)

So, with Goose away, Moose is free to give into the waves of dread and anticipatory sorrow she feels about Texas, Ohio, and a whole bunch of other stuff – you know, democracy in America, the persistence of misogyny, the crude pitting of race against gender in media framings of a range of social and political issues. Oh: and whether the Non-Lady Terps can manage to snag an at-large berth into the upcoming NCAA Tournament. (It is March, children, and you know what that means in Roxie’s World.)

In her restless movement back and forth between TV and internets, Moose has noticed that something distinctly elegiac has suddenly crept into the tone of the coverage of Clinton. That was evident in the weekly political analysis of Mark Shields and David Brooks last night on PBS’s NewsHour. Brooks spoke in hushed tones of a campaign that had lost its fight and is in effect on life support, suggesting that if Clinton loses on Tuesday, she will be entitled to the political equivalent of death with dignity: “She deserves 36 hours or whatever is necessary after that, if this does happen, to make up her own mind, to do it on her own terms.” HURRY UP PLEASE IT’S TIME, you feel Brooks muttering under his breath, before offering up a token gesture of pity a moment later: “I sense a lot of people who are fervent Obama supporters, at this stage, they have some sense -- they feel a little sorry for Hillary Clinton, because they like her, and they don't want to see her hurt, and they feel she's hurting now.” They like her? Boy, that’s news, isn’t it? I thought everybody hated Hillary!

Elegy is also the mode of Walter Shapiro’s “Hillary at Twilight” in Salon and of Emma Brockes’s “Hillary’s Last Stand” in The Guardian. Gail Collins’s New York Times column on Thursday even ends with a kind of epitaph for Clinton:

Here’s what I hope [Clinton] understands. She’s done fine. And she’d probably have won the nomination walking away if Barack hadn’t picked this moment to mutate into BARACK!

You do your best, and if things don’t work out, it just wasn’t your time. Life isn’t always fair.

Having talked her candidacy to death, the press can now be magnanimous. We beat the bitch, so let’s make nice. Let’s honor her grace, her accomplishment, her strenuous but ultimately futile effort. Let’s bury her in the pine box of history and get back to the party. Yes, we can!

And yet: Why does Moose choke up every time she reads those lines from Collins about doing your best and life not being fair? Why does it move her, that rhetorical gesture of one woman saying of another woman’s effort, “She’s done fine?” It could be because it meshes with many moments of women letting their guard down and connecting over Clinton’s candidacy that Moose has noted or experienced lately: the high-level woman administrator who bragged about coming out to the higher-level male administrator about her support for Clinton; the colleague who stopped dead in her tracks in a big, busy office, reached out a hand, and couldn’t stop talking about all that had gone wrong for Clinton; the Republican (but mostly apolitical) sister whose voice broke on the phone when she asked, “Do you really think she doesn’t have a chance?” and confessed she had planned to vote for her.

Middle-class, middle-aged women have not been filling arenas or falling into faints for Hillary Clinton. We have not for the most part taken leave from our jobs, sold our homes, or abandoned our children to hit the campaign trail for her. But that doesn’t mean we weren’t invested in her candidacy or that we weren’t pulling for her to break, as she put it, America’s “highest glass ceiling.” And it doesn’t mean we didn’t notice every effort to demean or dismiss her – “likable enough,” “because her husband messed around,” “cold,” “calculating,” “cunning,” “old.” It doesn’t mean we didn’t notice the disrespect shown by Senate colleagues who chose to endorse a younger male senator with far less experience or the cowardice of a national political party organization that allowed the debacles of Michigan and Florida to happen, robbing Clinton of two victories that might have turned the course of the race. And it doesn’t mean we won’t be watching closely to see how the party and the man who seems on the brink of defeating her will handle the next delicate stage of this historic campaign.

Roxie’s World has never said Hillary Clinton was a perfect candidate. We have acknowledged the flaws of her campaign and the disappointments in her record, but we supported her because we were impressed with her command of the issues and judged her to be the best candidate in the field. We also recognize that identification may be one of the lower forms of political emotion, but in these fleeting moments of women speaking quietly to one another of their shock, disappointment, and wounded pride, we may glimpse the outlines of the larger political tasks awaiting us. The ceiling still hasn’t been broken. Access to abortion in the United States is so limited that it might as well be illegal. Wage inequities persist. The planet is dying. Wars rage on all kinds of fronts, because violence is the toxic political air we breathe. You know the litany.

Yes, when women of a certain age and class look at Hillary we see a lot of our selves -- the tests we took, the dreams we had and have, the hard bargains we struck with life, the moments when our best efforts fell short. As we watch what feels like the end of one part of her amazing journey, Clinton achingly reminds us of all the smart girls who never felt pretty enough, all the pretty girls who still thought their ankles were fat, all the good girls who colored inside the lines and stayed late to help clean up. All true, all valid emotionally, but that’s not all. We have been looking at her for sixteen years, and now perhaps we can finally see her – Hillary Clinton is the unfinished work of feminism. If we don’t do it, who will?

Now, women and beautiful non-women, get out your hankies, roll up your sleeves, and click on over to some of these inspiring, inciting, delighting links:
Carry on, beloveds -- all puns intended.

*Roxie's World officially mourns the passing of qta --our first pal and role model in the blogosphere, authored by one of the best guys we know in the real world. We want qta to finish that diss so y'all will have to call him Dr. qta, but we will sorely miss those regular doses of queer wit, exquisite taste, and righteous pro-Hillary ranting. Love you, qta, mean it, sincerely.

Update: Here is the video of Senator Clinton's cameo last night on Saturday Night Live. Let me say this, kids: If she is on her way out of this race, she is going out with grit and a sense of humor. That's part of why we admire her and why, despite everything we've said in this post, we're not entirely counting her out yet. We're with her, as her husband memorably put it in 1992, "until the last dog dies," and this old dog ain't near dead yet. Keep the faith.