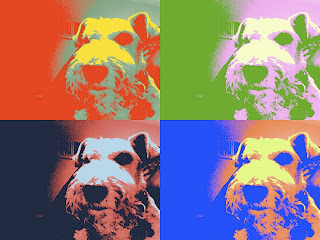 Pop the corks, kids. It’s time to celebrate the Second Blogiversary of Roxie’s World! Yes, it’s true! As of today, your favorite dog blog devoted to politics, pop culture, and basketball has occupied its happy little corner of the blogosphere for two full orbits of the sun. Think of it, kids: Two whole years -- from the agony and the ecstasy of March 2006, when I was diagnosed with mitral valve prolapse and our beloved Lady Terps were making their improbable run toward a national championship in basketball, to the whirlwind and the fierce urgency of this very minute, as the nation waits to see whether it will send a black man, a white woman, or yet another constipated white guy to occupy the White House for the next four years (barring death, impeachment, or sudden resignation).

Two years – and you, my beloved readers, have been right there with me, pointing and clicking and commenting and lurking, sending me links and jokes, cartoons and parodies, public and private words of encouragement or admonition. One of you, a particularly beloved one of you, even sent me a blogiversary card this morning before my typist had made it through her first cup of coffee. Now that, my friends, is devotion! But you know that I love you, love you all – Be you lady or non-lady, English prof or grad student, terrier or beagle, pure bred or mongrel, Clintonista, Obamaniac, or still grieving Edwardian, butch, bitch, faggot, dyke, tranny, or cat person, aging Bruce Springsteen worshiper or rapt devotee of Amy Winehouse, advocate of the zone defense or apostle of compact fluorescent bulbs.

Wherever you are reading these words right now – from College Park to Karachi, from Portland to Paris, from Carolina to Kuala Lumpur, from Mississippi to Mumbai, from the Garden State to the prairie to the golden shores of California* – I stretch these ancient, aching paws out to embrace you, so that we might all feel young and new again, re-born in the ecstasy of even a virtual touch. As the poet said, I celebrate myself, and sing myself, but in doing so I celebrate you, too, my partners in the dreams and desires that have brought Roxie’s World into being. Say it with me, children: Without you, I’m just an old dog with two crazy moms and a laptop. With you, I’ve got a whole world in my paws.

Now, because it’s a holiday here in Roxie’s World, we needn’t trouble ourselves with such weighty matters as the resignation of New York governor Eliot Spitzer or the Sturm und Drang over Geraldine Ferraro’s remarks about how lucky Barack Obama is to be a black man. Actually, we are disappointed that Gov. Spitzer gave up the ghost before we even had a chance to declare an Official Spitzer Resignation Watch, but what the heck – That gives us more time to set up an Official Spitzer Divorce Watch. (Betting opens in comments immediately.) As for Ferraro, she has now severed her ties with the Clinton campaign, and a million other bloggers have already condemned her as a racist and a “national embarrassment” (don’t hold back, ModFab), so we’re late to that story anyway. Go ahead and flame us, but we confess to being underwhelmed by this alleged outrage and think it’s another example of how effectively Obama and his supporters have used fears of being called a racist to squelch even mild criticism of the candidate. Yeah, yeah, Ferraro sounds grouchy and bitter, a bit like the mean old lady neighbor telling all the kids to keep the heck out of her yard (to borrow a line Moose picked up today from another one of my devoted readers), but her remarks, though intemperate, hardly make Ferraro the second coming of Strom Thurmond. For the record, we’re sick of this kind of petty politics of mass distraction on both sides. We wouldn’t have fired Samantha Power for calling Hillary Clinton a monster, though, if we were Obama, we might have dumped her for spilling the beans about how murky and nuanced his plans for Iraq are. Oops! It was a whole lot easier to declare yourself against the war from the safe perch of the Illinois state senate, wasn’t it, Senator? “Yes, we can” might not exactly be your answer to the question of whether you could really bring most troops home within 16 months of taking office, but we wouldn’t want to confuse your happy voters with an inconvenient little thing like the truth, now, would we? Bye-bye, Professor Power. Don’t let the door hit you on your way back to Harvard.

Darn, kids, now we’ve gone and spoiled the celebratory mood of this post. Maybe the vid down below will restore the festive feeling. Click on it and see. Happy blogiversary to each and every one of you. Thanks for coming to the party. See you again soon!

*Locations of actual Roxie’s World readers, according to statcounter.com.

Email ThisBlogThis!Share to TwitterShare to FacebookShare to Pinterest
Labels: blogging, pictures of me