So, what do three English profs -- all Americanists, all chicks, all enthusiastic foodies -- do for fun and a bit of low-key continuing education on a fair summer evening in their nation's capital? Hmmm, how do you combine love of food with (critically informed) love of country, without straying too far from a Metro station? Why, it's easy, my hungry lit and history critters! All you gotta do is swing by the National Archives to check out the recently opened exhibition, "What's Cooking, Uncle Sam? The Government's Effect on the American Diet," and then step right over to America Eats Tavern, the pop-up restaurant set up by rock-star chef José Andrés in conjunction with the show. (Make a reservation. The joint is jumping from good buzz and the coolness of its short shelf life.) 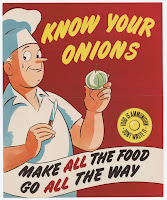 The "What's Cooking?" exhibit won't overly tax your summer-ized brain. Moose commented that it seemed targeted at (not especially precocious) fourth graders, but it offers enough in the way of nifty images and compelling tidbits of cultural history to justify a visit. (Hey, it's free, and you can drop in and make sure the Constitution hasn't been shredded while you weren't looking!) Moose and her companions, the Shy One and the individual who comments here occasionally as kb, particularly enjoyed some pretty botanical prints of exotic agricultural products the government was exploring and promoting, including Japanese persimmons and Meyer lemons. Moose didn't see any posters for the Clean Plate Club (which was discussed in our recent food/nutrition post, "Breaking Up With Potatoes"), but she was intrigued to see the range of ways in which food has, for more than a century, been bound up with economics and ideology, with systematic government efforts to promote and produce particular kinds of bodies, behaviors, citizens, and identities. Many if not most of these efforts have failed -- we never did become a nation of carp-eaters, despite the Bureau of Fisheries' strenuous promotion campaign ("Eat the Carp!") of 1911 -- but that is part of what makes them so fascinating, especially as we watch the rollout of yet another government plan to encourage healthy eating and physical activity.

To heck with that, though! The real point of this gathering of friends was to see what kind of restaurant Andrés would spin out of his partnership with the Archives and Uncle Sam. We are pleased to report that he is in no way slavish in relation to the exhibition, which means, among other things, that there is no carp on the menu. (I know -- Try to contain your disappointment.) Given the prominence of certain bivalves on offer (prepared seven different ways, including grilled, stewed, and in a spoonbread topped with ice cream and caviar), you might suppose the U.S. government had staged an aggressive "Eat the Oyster!" campaign if you had imagined Andrés would be so literal, but you hadn't (unless you are this guy) and he isn't. The menu is dazzling and chockfull of historical fun facts uncovered by Andrés' staffers, who did weeks of research in the Library of Congress to find recipes from the nation's culinary past. Who knew, for instance, that catsup wasn't always made out of tomatoes? America Eats offers eight different varieties, including one made of -- natch! -- oysters and another made out of -- what? -- Jack Daniel's.

The menu doesn't have a great deal of coherence, but neither does the nation whose diversity it celebrates. (Insert flag-waving icon here.) Our waiter explained as soon as we sat down that, unlike Andrés' other establishments, America Eats is not a tapas restaurant. Still, one could dine happily by treating it as such, grazing and sharing from the several courses of smaller plates and sharing a couple of entrees. Our party of three did that and was too stuffed to consider dessert, though, truth be told, the dessert selections were not awe-inducing enough to make Moose willing to cash out anymore activity points in order to try one. C'mon, José: Cheesecake? Pineapple upside down cake? Can't we get a little more unconventionally retro than that?

Earlier in the meal, Andrés' trademark ingenuity is more in evidence, as he riffs on classics such as lobster newberg and the locally mandatory crabcake. We give high marks to the two forms of oysters we sampled, on the half shell and grilled in butter. The oysters were briny enough to make a girl think she was standing in the surf pulling them out with her bare hands. The night's only real disappointment was a New England clam chowder with poached cod that seemed undercooked in both the literal and the figurative sense. It was bland, and Moose does not waste points on bland these days.

All in all, though, America Eats is a night of fun and fine dining, offering great food, attentive service, and a menu that will captivate you even if you don't earn your living studying American culture. However, we think non-local readers who do earn your living that way and will be in Baltimore for the ASA convention in October should plan to spend an evening in DC so you can visit this joint before it disappears. Not convinced yet? Click below on the movie Moose made out of the not great photos she snapped of most of what was eaten last night. We are confident that her epic, The Case of the Hungry Americanists, will persuade you to stop in for a bite at America Eats. Oh, and visit the bar, which for some strange reason is not called America Drinks. It's good, too.


(The Case of the Hungry Americanists is brought to you by New Dog Productions, a wholly owned subsidiary of RW Enterprises, LLC. No oysters were harmed in the making of this film. Oh, and for reasons no one could figure out, America Eats brings diners their checks inside a book, which, in our case, was a Hardy Boys mystery. That explains the strange denouement of this woefully under-narrated film. With love and thanks to kb and the Shy One, who had absolutely nothing to do with the making of this film, though they ably assisted in ordering, eating, and photographing the food.)
Posted by Roxie Smith Lindemann at 7:24 PM