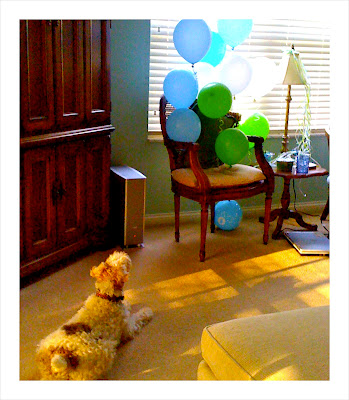 We don't usually title Moose's humble photographic efforts, to which this blog's loyal readers are regularly subjected, but The Party's Over seems an apt name for this lucky shot of Ms. Ruby mesmerized by the balloons left over from the 80th birthday bash thrown for the Mother of the Moosians on Saturday. Ruby bounded out of her mobile home on Sunday morning and went straight to the festive bunch of slowly sinking balloons in the living room. She watched them for awhile, then entertained herself and assorted caffeinating Moosians by experimenting with various ways of attacking them, including pouncing, swatting, and snapping at them. Eventually, some sensible person intervened to put the balloons out of reach, concerned that the embodied dog of Roxie's World might injure herself if one of them popped and forced her to ingest an inordinate amount of helium. Just in case the video below, which by some strange coinkydink Moose had stumbled across late Saturday night, is not an accurate depiction of what happens when a cute little fox terrier is forced to ingest an inordinate amount of helium (trigger warning for extreme ridiculousness and [we hope] possible fakery):

Ruby and the Moms tore themselves away from the balloons and the family and hit the road at high noon yesterday. They made it back to Roxie's World shortly after 10 PM, just in time to unpack, nuke a couple of low-fat frozen dinners, and accidentally catch the last few minutes of The Marriage Ref. Moose's verdict on the show? If the Defense of Marriage Act can't protect us from this bizarre monstrosity, what freakin' good is it? Srsly, people, if this is what civilization has come to, I think we should demand a do-over.

So, the pack is back. The trip was in every way delightful. Moose worried about gaining weight simply because she crossed the threshold of an ice cream parlor at one point and stood down wind of a heaping vat of mac 'n cheese at another. She ended up losing a couple of pounds, of course, and so is eagerly anticipating an official transition to maintenance later this week. Stay tuned for the further adventures of Moose 2.0: A Less Portly Dyke Than She Used to Be!

Meanwhile, elsewhere in the blogosphere, a smart young whippersnapper calling himself Will Danger went to see Next to Normal at KenCen and wrote a fine long post exploring what the show has to say about the affective trajectory of grief. And Historiann asks some timely questions about whether Skype interviews will eventually (or soon?) replace the meat markets centralized forums for academic interviewing that the conventions of the American Historical Association and the Modern Language Association have become in recent decades. Go read them, darlings, while we knock the sand out of our shoes and try to remember what exactly it was we intended to accomplish this summer. Oh, and if you really need to hear the song our post title put into your sensitive little head, click here and let Doris Day soothe your disappointed, dissipated, party-loving soul. Peace out.
Posted by Roxie Smith Lindemann at 4:55 PM