This here blog has had quite a bit to say on the subject of marriage equality over the years. We've mapped out a tortured, wishy washy carefully nuanced, ambivalent position that captures our passion for civil rights and our (queer/feminist) skepticism toward marriage as a means of arranging intimacy and distributing benefits to which all citizens should be entitled, regardless of relationship status. Do a label search on "gay marriage" if you are interested in finding those posts. Our all-time favorite on the subject is a piece from March 2010 commemorating the Moms' twenty-sixth anniversary. Its subtitle is "Love Without License." A close second would be a long postmortem on the 2008 election, in which, you may recall, voters elected the nation's first African-American president while voting down same-sex marriage in California, Arizona, and Florida. That one is called "Repetitive Motions."

We may not be quite the rainer on the same-sex marriage parade that our good buddy queer legal eagle Katherine Franke is (here she is on WNYC), but, having said so much, we feel permitted to take a pass on coming up with something pithy to say about Gay New York becoming Gay-Married New York, as civil marriage rights became available Sunday to same-sex couples in the Empire State. Instead of telling, we're more in a mood to do some showing -- of some of the very compelling images that have come out in the last day or two. Regardless of how fraught and fuzzy necessarily complex our position on marriage is, we have to admit that pictures like these move us. They make us smile or bring a tiny tear to a jaded eye. More importantly, though, they also have significant political potential in the power they may have to reframe the way the culture sees not only the institution of marriage but sex and gender variation more generally. (We've made this point before, deep in this post.)

As of Sunday, in New York, this is what a newly married couple looks like (via): 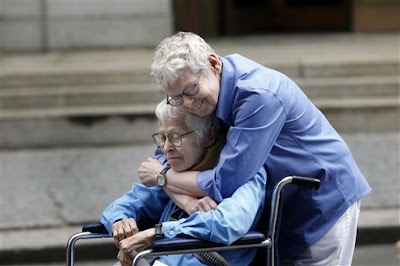 (The couple is Connie Kopelov, 84 [in the wheelchair], and Phyllis Siegel, 76, who have been together for 23 years and were the first couple married in Manhattan. This lovely shot reminds us of the Ladies First etiquette that prevailed in San Francisco back in 2008 when pioneering dyke activists Del Martin and Phyllis Lyon were the first same-sex couple to jump the broom during the brief period when marriage equality was available in the Golden State.)

These folks, too, are ready to play The Newlywed Game: 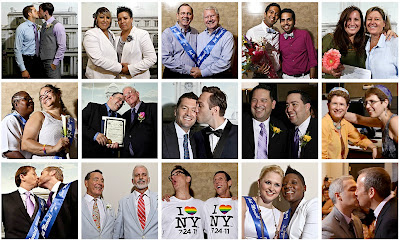 (The image above is a partial screen capture of a gallery of "Portraits From the New York City Marriage Bureau" that ran in the New York Times. All photos by Fred R. Conrad, NYT. See the whole thing, which includes links to brief audio commentary by each couple, here. The website BuzzFeed also ran a collection of 60 portraits of just-married same-sex couples. Access here.)

The logic of such representations is inescapably normalizing. A wedding portrait is a wedding portrait, whether the couple at the center of the frame is same-sex or opposite-sex. These images fit comfortably into the matrimonial grid, as it were, and into the assimilationist logic embraced by many proponents of same-sex marriage. "We feel a little more human today," commented a 68-year-old New Yorker who married his partner of 42 years on Sunday. Wow: State-sanctioned love makes us a little more human. So much for that whole We don't need no piece of paper from the city hall keeping us tied and true, eh? Please, sir, license my love so that I may feel a little less monstrous than I have felt these 42 years.

On the other hand, there is also something ineluctably queer about these photos, shaped as they are by a homologic we don't see in opposite-sex wedding portraits. Roxie's World is in general opposed to same-sex couples dressing alike, which is why the Moms carefully consult one another before ordering out of certain catalogs that cater to women of a certain age and sensibility. In the wedding photos, however, sartorial similarity -- matching jackets, ties, tee-shirts, banners -- injects an element of symmetry that is, in this context, destabilizing and revealing, accustomed as our eyes are to the traditional asymmetry of a groom in a tux and bride in a gown. On closer examination, the new marital order turns out not to look like the old one, at least not entirely.

The photos also have a giddy, anarchical quality we don't tend to associate with hetero wedding portraits, hyper-stylized and air-brushed as they are. The slightly unruly, improvised look in some of the photos from New York no doubt has something to do with the excitement and uncertainty of rushing to get on stage for the opening performance of a new musical we ought to call The Empire (State) of Love. One might hope, though, that something of that unruliness will persist even as the novelty of same-sex marriage wears off, in New York and elsewhere. For those who would insist that marriage will change (for the better) once queers get hold of it, the signs of difference and disruption in these images are encouraging: State-sanctioned love doesn't make us more human. We make state-sanctioned love more queer. Pretty to think so, isn't it?

As we pause here in that happy interlude that comes after the first weddings and before the first divorce, yes, my darlings, Roxie's World raises a glass and a paw to the idea that queer love can survive anything, even marriage. Congratulations to all of those who took the plunge this week. May your landings be soft and your love as stubborn as an old queen trying to get the bartender's attention at last call. Peace out and mazel tov! 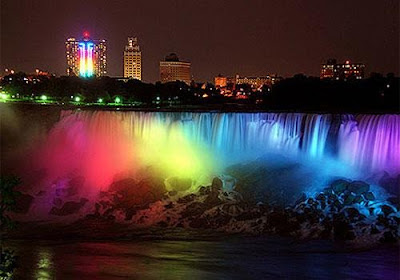 (Niagara Falls [via] all decked out [maybe] for same-sex marriage.)
Posted by Roxie Smith Lindemann at 1:25 PM