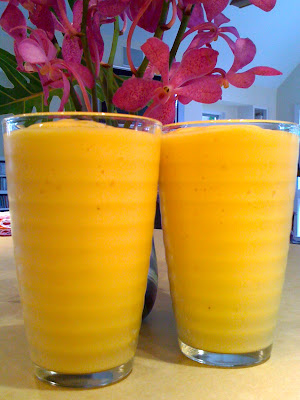 Moose couldn't take it anymore. Over the past couple of weeks, she's been subjected to a barrage of ads for McDonald's new mango-pineapple Real Fruit Smoothie. The commercials are peppy and fun and summery, and the fruit is so luscious and juicy-looking that Moose's mouth would water every time she saw the ad. Damn, she'd think to herself, I want me a mango-pineapple smoothie! Finally, instead of driving to McDonald's, which she has not done in several decades, she ordered Goose to pick up a mango or two on a recent trip to the grocery store. This morning, she decided today would be the day she made her very first smoothie.

Yep, kids, this is what passes for culinary adventure as the household moves forward on the effort to maintain Moose 2.0: A Considerably Less Broad Broad Than She Used to Be. You want high-fat food porn? Photos of risotto swimming tantalizingly in a sea of butter and white wine? Recipes that call for half a pound of ricotta without offering the nutri-Nazi qualifier part-skim? Then head on over to our pal Comrade PhysioProf, whose latest nom de plume is the apt Comradde RisottoProffe. He'll keep you fat and happy or permit you to indulge in some safe full-fat voyeurism if that is what floats your boat.

Here in Roxie's World, however, the name of the game is keeping the points low and the satisfaction high, which means, ladies and non-ladies, that it's time to start your blenders!

Moose did some surfing around the intertoobz looking for a smoothie recipe, just enough to realize that you don't really need a recipe. Here's what she ended up doing, and the results were deelish:

1. Peel and chop a mango. Toss into blender.
2. Chop a nice thick slice of pineapple. Toss into blender.
3. Slice a banana. Toss into blender.
4. Dump 3/4 cup of non-fat vanilla yogurt into blender. (We've been enjoying Brown Cow yogurt lately. Just sayin'.)
5. Dump about a cup of ice into blender.
6. Put lid on blender, press "smoothie" button, and pulverize the heck out of that healthy $hit.
7. Pour into a clear glass, photograph for posterity, and present to skeptical partner, who, a few minutes later, will squeal happily, "I feel like Popeye eating his spinach!"

So, what's (not) cooking in your blenders, nutri-Nerds? Moose brought some of the season's first peaches home from the market on Sunday, so we're betting tomorrow's frothy mix will include a fuzzy orb or two. What do you do to sex up your smoothies? Are there any fans of flaxseed out there? Debauchees of dates? We're new to this liquid breakfast business, so we are eager to hear your thoughts.

Meantime, since it's Tuesday, here's a little glimpse of Ruby, whose been spending quite a bit of time curled up with a new toy the Shy One brought for her the other evening. It's a pheasant, and Ms. Ruby has been obsessive in her devotion, spending long hours in her crate and refusing to let anyone else get near the adored stuffed critter. She loves it so much she hasn't even disemboweled it to get at its squeaker yet: 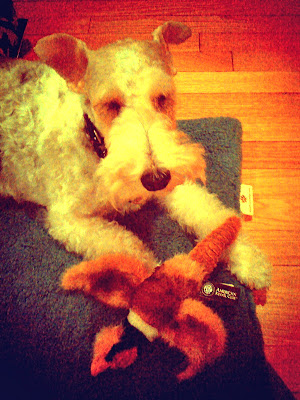 Ruby Tuesdays are about songs, so here's one from Lucinda Williams, who the Moms will be seeing tonight at Wolf Trap. Technically, it's not a Ruby song, since that name is never uttered, but it's a beautiful song about how all dog's children are born to be loved, which means it has a special resonance for a girl rescued from the cold cruelness of a puppy-mill and transported to the paradise of Roxie's world. Sing it, Lucinda, and remember, darlings: You weren't born for nothing either. Peace out.