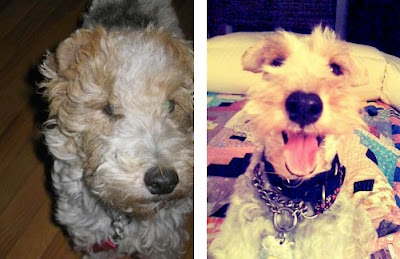 The heartwarming story of Sister Ruby's journey from a Missouri puppy mill to a Maryland pleasure palace is now up on the American Fox Terrier Rescue website. It includes photos even the Moms have never seen of the new embodied dog of Roxie's World shortly after her liberation, late last November, from a life of confinement and forced breeding. (Ruby was called "Sissy" by the angels who rescued her, so her transitional name was "Sister Ruby.") You'll also find a little piece that Moose wrote to let readers know how Ruby's adjustment to life with a ridiculously large backyard and a couple of besotted humans is going. Shorter version: The poor kid is coping. Somehow. 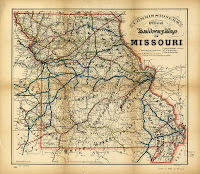 On their recent road trip to the midwestern Land of the Moosians, the Moms -- in that way they have of pretending that dogs talk -- imagined that their adorable little companion kept asking from the backseat of the car, "We're not going through Missouri, are we? 'Cause I really don't want to go through Missouri!" -- As if she were a canine Louise ordering Thelma to find a way to get to Mexico without going through Texas. "Not to worry, Ruby-doo," Goose assured her. "We won't be going through Missouri, ever!"

Sometimes late at night, curled up on the couch, Moose gazes into Ruby's big, brown, trusting eyes and tries to imagine Missouri and the first three years of her sweet girl's life. She wants to reconstruct that missing time and space in order more fully to understand the present -- the way Ruby will freeze in her tracks when she encounters a more dominant dog, for example, or the deep, instantaneous attachment she can form to a new toy. In this desire, Moose is not unlike Denver in Toni Morrison's Beloved, who longs to know the story of her family's origins at Sweet Home, the Kentucky plantation from which Sethe, her then enslaved mother, escaped while pregnant with her. "Denver, you can't never go there," Sethe urgently insists, after explaining Sweet Home's persistence in what she calls rememory. "Never. Because even though it's all over -- over and done with -- it's going to always be there waiting for you. That's how come I had to get all my children out. No matter what."

Is it fair to compare a puppy mill to a slave-holding plantation? Probably not, though we think the analogy points to certain brutal economic similarities between the two spaces. In any case, we hope you'll grant the validity of Moose's desire for knowledge of a beloved other's possibly traumatic past. Tell me your story, we say to those we love. Tell me your story, so that I may know you fully and we can share whatever burden there may be from your past. Tell me your story, and I will tell you mine, and in the telling we will become something new.

Or we will write a new story, in a new place, a better place, a hotter than hell place that is not hell but Paradise. With smoothies.

It's the American dream, darlings, as revised and realized by the Department of Middle-Aged Dykes With Dogs. Don't be jealous. Every breed has a rescue organization. If you love a particular breed and are ready to expand the size of your pack, get in touch with a rescue group. Or contact a shelter in your area. As Lucinda Williams says in the song we embedded here the other day, "You were born to be loved" -- and you were born to love. What the heck are you waiting for?


* * *
Dedicated, with thanks and admiration, to the good folks of American Fox Terrier Rescue, who brought the sweetest critter on dog's earth into our lives, and to all the friends who have so kindly welcomed Ms. Ruby into our extended pack. We love running with each and all of you, actually and virtually.
Posted by Roxie Smith Lindemann at 2:09 PM