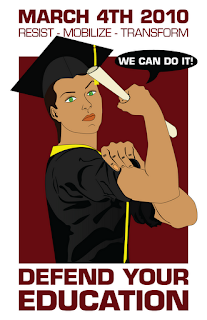 Seems like a good idea, doesn't it? Educating the state, we mean.

We've been intending to write this post since the big March 4 Day of Action to Defend Education, which, as we noted at the time, turned out to be a day of not much action on the campus of Queer the Turtle U. Elsewhere, however, the day became the occasion for a significant shift in strategy for those concerned with the problem of funding for higher education. Most notably in California, where so much attention had been focused on the regents and the always entertaining Mark Yudof, on March 4 the battle was taken to Sacramento, where 2000 people rallied at the state capitol in an action designated "Educate the State." At that rally, Berkeley political science prof and co-chair of the Berkeley Faculty Association Wendy Brown gave an impassioned speech on the vital importance of an educated citizenry to the functioning of democracy:

For public universities, of course, the state has to be a target of efforts to organize, lobby, advocate, and educate on behalf of their missions and their institutions. That is especially important now, in a moment when a deep recession has converged with decades of declining levels of state support to put "quality, capacity, and the underlying ability to meet student and societal needs at risk," according to Paul E. Lingenfelter, executive director of the State Higher Education Executive Officers. Lingenfelter is quoted in a Chronicle of Higher Ed article from mid-March that surveys the national scene and sums it up with a sobering headline: State Cuts Are Pushing Public Colleges into Peril. (Go read that article if you haven't already. You need to know these things.)

As this year of activism on campuses throughout the country winds down, we are pleased to note that California is not alone in raising the pressure on state governments to halt the functional privatization of public higher education. In Georgia a couple of weeks ago, hundreds of students marched on the state capitol to protest cuts to the state's university system. In Illinois, our rabble-rousing pals in Shampoo-Banana are planning to use another of their collective furlough days in April to "storm Springfield," as one of the organizers puts it in a fiery post on the importance of protest not just as a means of educating the state but of teaching her daughter the value of being "a giant pain in the ass." PAWS UP to that, eh, kids?

Meanwhile, here in Turtle Country, flowers aren't the only thing popping up on campus. In our neck of the woods, it appears that part of educating the state might involve sending a message to Gov. Martin "You, Sir, Are No Jack Kennedy" O'Malley, who is up for reelection this November: 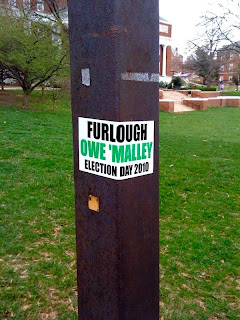 Moose did some research on teh Internetz and thinks that "Furlough Owe'Malley" is connected to a group of state employees disgruntled with having been forced to shoulder a disproportionate share of the effort to balance Maryland's budget in the past couple of years. We share their consternation, if not the hostility to unions evident on their blog. Heading into his re-coronation (oops! of course we meant to say reelection!) campaign, O'Malley seems to think his cynical and short-sighted (oops again! that should have been courageous and tough-minded) strategy of slashing budgets rather than raising taxes will protect him in a rematch with his opponent in 2006, former Gov. Robert Ehrlich (who will formally announce next week his intention to run again for his old job). It will be interesting to see how the strategy plays out. For all O'Malley's fiscal restraint, Ehrlich will still try to tar the Great Furlougher as a big spender who saddled Maryland's middle class with "the largest tax increase in Maryland's history" in 2007. (WaPo compares the records of the two govs here. O'Malley did raise taxes in 2007 -- and we applaud him for it.) O'Malley will counter that Ehrlich, who actually governed as a moderate and was pretty generous to QTU, is a spooky-scary guy who will turn back the clock -- to what? the time when the state's university system got its largest budget increase ever? Oops!

Listen carefully, precious Turtles: We can't stand Gov. Bob and have no wish to see him ensconced in Annapolis again, but Martin O'Malley can't count on us to get up off our big comfortable couch and vote for him a second time. Indeed, Moose has publicly declared she cannot imagine any circumstances under which she would do so. Our disgust with O'Malley comes not from the right -- surprise, surprise! -- but from the left. It arises from his willingness to put his own political self-interest above the needs of the state's most vulnerable citizens and the financial security of its 70,000 employees. Furloughs and cuts to Medicaid and local aid programs were not fiscal necessities in Maryland. They were political choices made by Martin O'Malley and Democrats in the state's legislature who refused, for example, even to consider raising taxes on alcohol, despite the fact that taxes on beer and wine haven't been raised in 37 years and taxes on distilled spirits haven't budged since 1955. For an illuminating survey of the alternatives that were available to O'Malley, go read around on the wonkish Web site of the Maryland Budget and Tax Policy Institute, which advocates a mix of cuts and revenue enhancements as a way of balancing the state's budget while preserving the level of public investment needed to assure "a good quality of life and a decent standard of living for all Marylanders." (That line is from a special report, "A Balanced Approach to Meet Maryland's Needs." It's a PDF file accessible from here.)

As of today, there are 11 days left in the 2010 session of the Maryland General Assembly. It appears that the forces of gutlessness are going to prevail. That means no tax increases, about $120 million in cuts above the $1 billion originally proposed by O'Malley, and, we surmise, an increased likelihood of a third round of furloughs for QTU staff and faculty next year. Further, there's a proposal in the state senate to freeze support for the university through 2012, which means more fun lies ahead over how to maintain both quality and affordability.

Educate the state: What does that mean in Roxie's World? Well, for starters it means banging the drum here on this little blog, hoping that local readers will get informed, get angry, and get active in support of higher ed. It also means reaching out to the good guys and gals who represent us in Annapolis. We're fortunate in the People's Republic of Takoma Park to be represented by true profiles in political courage, like Senator Jamie Raskin and Delegate Heather Mizeur, who believe in public goods and have the guts to fight for them. (Raskin is a law prof, too, at American University, so he's especially sympathetic to the cause of higher ed.) We're in regular contact with these dedicated public servants and have let them know how disappointed we've been by the lack of compassion and equity in the state's budget decisions. We tell them we expect Democrats who campaign as progressives to govern as progressives. We'll work and vote for Raskin and Mizeur again. O'Malley? Sheila Hixson, who chairs the House Ways and Means Committe and issued a blanket declaration that "We're not going to consider taxes" this election year? Sorry, folks. These Turtles will be staying in their shells when it comes to you.

Who's your rep in Annapolis? Reach one, teach one, Turtles. We've got some educatin' to do.
Posted by Roxie Smith Lindemann at 10:17 AM