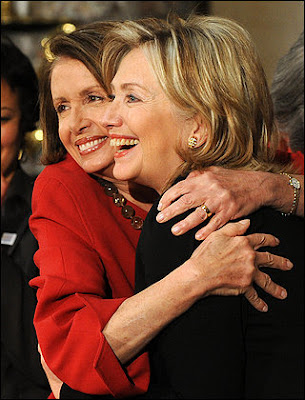 OK, look, there hasn't been any irrational exuberance breaking out in Roxie's World over the passage of health insurance reform. Yes, we are pleased that the Precious and his strong Democratic majorities in both the House and the Senate were finally able to deliver on a major piece of legislation. We are also not displeased that Republicans have emphatically demonstrated that they don't mind in the least if their disinformation and obstreperousness whips their demented followers into a frenzy that threatens to become violent (or, wait, that actually becomes violent). The vote is a huge political victory for the president, and it's one he and the party desperately needed in order to get the words "embattled" and "flailing" out of every single sentence describing the Democratic condition as mid-term elections approach. It was good to see the president in Iowa yesterday, leading a happy crowd in a boisterous chant of, "Yes, we did!" Cut and print, sweet peas. There is your fall campaign commercial all fired up and ready to go.

On the other hand, we are in a wait-and-see mode on the legislation itself. Will it really control costs? Will it be as good a deal for the people as we suspect it is going to be for the insurance industry and the pharmaceutical companies? And what will the long-term consequences of the president's executive order on abortion be for heterosexually active fertile persons with vaginas? Only time will tell.

On the other other hand, we're tickled pink that's it's been a good week for the hardworking women of the Democratic party, most notably House Speaker Nancy Pelosi and Secretary of State Hillary Clinton. The photo above shows the two engaging in some serious girl-on-girl public affection yesterday at a Women's History Month celebration in the Capitol's Statuary Hall. Pelosi is getting major props for having corralled the votes needed to pass the Senate's version of the legislation, when she and many other members of her fractious caucus would have preferred the more liberal House version. She lined up the last few needed votes by agreeing to the aforementioned executive order on abortion. Did she take some serious $hit for the deal from some of her best friends and allies in the fight for reproductive freedom? This WaPo story on the back-stage drama to round up votes suggests she did.

She deserves that $hit, but she also deserves credit for getting the job done. Imperfect as the bill is, we are inclined to think it was a step worth taking and that not taking it would have been politically disastrous for Dems. Success breeds success, so we hope the bill changes the narrative and helps the party get its mojo back. Gail Collins had a funny column on how passage of the bill immediately transformed Washington and everybody in it, turning the bunglers and do-nothings of yesterday into the can-do geniuses of today. "I guess it was because of the new president, Barack Obama," Collins deadpans, "who is so much more decisive and take-chargey than the old president, Barack Obama. And, of course, he was helped by the speaker of the House, Nancy Pelosi, who is strong and brave and pure of heart. As opposed to that party hack, whatshername. Hated her."

Meanwhile, in Foggy Bottom, the SOS has had a fairly impressive week as well. Secretary Clinton has been busy spanking Israeli prime minister Binyamin Netanyahu for announcing plans to build new settlements in disputed areas of Jerusalem. She's also been helping out on a new treaty with the Russians to reduce the number of nuclear weapons in the arsenals of the two nations. Play nice, boys, and, um, let's put down some of the more dangerous toys, shall we? Thank you, Madame Secretary, for all you to do make the world safer and just a little less testosterone-fueled.

PAWS UP for the ladies and a little Friday happy dance for some concrete actions that may lead to some positive results. Yes, we did -- Now, let's do some more! Am I right, kids? Of course I am. Peace out.
Posted by Roxie Smith Lindemann at 12:25 PM