Being a Roundup of Roundups, Plus a Vid and Evidence Suggesting that Activism Makes You Happy (In the Unlikely Event That You Didn't Already Know That) 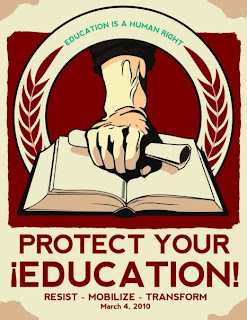 March 4 proved to be a Day of Not a Whole Lot of Action on the campus of QTU, where news of a small rally and teach-in was overwhelmed by ongoing coverage of street disturbances in College Park following the Non-Lady Terps' stunning upset of 4th-ranked Duke in basketball late Wednesday night. (Of course, the moms were there, silly, and, yes, somehow they managed to celebrate the glorious win over the Evil Empire without setting anything on fire or climbing up any lampposts.)

Plenty was going on elsewhere, though, as campuses across the nation responded to the call to defend public education in the face of devastating budget cuts and rising fees. We've got nothing new to say on the subject, so we will be content to direct your attention to a number of fabulous link farms that have already sprung up on Thursday's events:

Defend Education (.org), the folks who issued the original call for a day of action, have set up a good list of links that is strong on national and California coverage. It's here.

Remaking the University, run by our blog boyfriend Chris Newfield, is doing its usual kick-a$$ job of covering the story, with photos and links to darn near everything. Just go to his main page and let your fingers do the clicking.

Student Activism, run by Angus Johnston, has a series of posts reporting on events as they were unfolding. He did an amazing job of tracking the far-flung pieces of the picture and fitting them together in a more or less orderly way. Start here, then go here, then here, and here.

WaPo education reporter Jenna Johnson has a good roundup with links to coverage of the day's actions in campus newspapers. It's here.

The report in The Chronicle of Higher Ed focuses mostly on California but touches briefly on actions elsewhere. A Chronicle subhead writer felt a need to declare "protest fatigue," perhaps because students at Santa Cruz managed to shut the university down only "partially." The story is here.

Here is a vid of action at UC, Davis, which includes the effort by protesters to shut down I80 -- and the efforts of police to stop them. We don't go for that kind of high-risk maneuver ourselves, but, hey, if we got slapped with tuition increases of 32%, we might consider it:

San Francisco Chronicle coverage of the California actions is here.

Update: One of our sources on the ground in Shampoo-Banana sent us a link to this vid of a well-attended protest and rally at the University of Illinois. No cops on the scene, but no attempts to shut down major thoroughfares either.

Oh, and that evidence that activism makes you happier? It's right here, you little rabble-rouser. Click on that link, and have a better tomorrow. Peace out.