How to Cook a Baby

Transcript of an actual conversation in Roxie's World, this morning:

Goose (checking e-mail): You know, Williams-Sonoma got into trouble because they started making too many gadgets.

Goose: No, really. They're a very good company, but they got carried away making separate gadgets and machines for every single silly task in the kitchen. It's ridiculous. 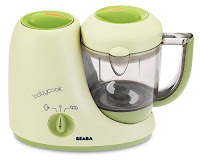 Goose: Like this one they just e-mailed me about, for example: the Beaba Babycook.

Moose: That's not ridiculous. We've been needing something to cook babies in for ages. The flame-colored le Creuset dutch oven is really not right for the job. Let's order a Beaba Babycook! Do you think they could FedEx it so we could try it out over spring break?

Gales of laughter, sounds of coffee exploding out of mouths and being launched across the breakfast nook. The phrase, "Beaba Babycook" repeated several times in rapid succession, first by one mom and then the other, setting off fresh rounds of guffaws, chortles, snorts, and giggles.

Simple minds, simple pleasures. That's the way it is in Roxie's World on a cloudy morning in the middle of March, 2010. What's cooking in your neighborhood today, my pretties?
Posted by Roxie Smith Lindemann at 11:40 AM

Email ThisBlogThis!Share to TwitterShare to FacebookShare to Pinterest
Labels: laughter, my moms