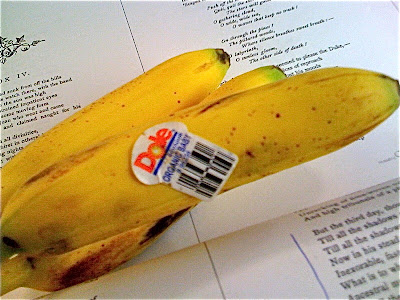 As a follow-up to last week's wickedly witty post on "How to Cook a Baby" we offer this amusing little morsel from our extremely beloved Candy Man, who sent the photo above (click on the image if you need to embiggen it to read the label, kids) to Moose along with a note, "Maybe something to put in your baby cooker? Always wanted to try an organic baby . . . !" which of course prompted Moose to snort right into her laptop. Then she paused, as she always does before anything bearing the "organic" label, and tried to imagine what an inorganic baby would look like and where it would come from. After all, she reasons, I suspect the vast majority of babies -- and bananas and tomatoes and cucumbers and cauliflowers -- are chiefly or ultimately of biological origin. Where would you get an inorganic baby, and, crucially, what would it taste like if you cooked it up in your Beaba Babycook?

And now, as is so often the case, Candy Man has succeeded in distracting Moose with thoughts of food and cooking and eating and drinking. Which explains only in part why we are so inordinately fond of him. By the way, that pile of organic babies in the photo is displayed upon a copy of George Eliot's longest poem, The Spanish Gypsy. Apparently, even the most dedicated Victorianists require large infusions of potassium to get through the nearly 300-page opus, but we credit the Candy Man for his commitments to both healthy eating and careful reading.

What? You were expecting we'd break our prolonged blog silence with a long, thoughtful piece on how women were thrown under the bus (via) in order to pass health insurance reform? Or maybe a slack-jawed meditation on what it means to live in a world in which WaPo runs earnest "Style" section stories on the challenges butch lesbians face finding masculine apparel that is formal enough for the same-sex weddings that are now occurring in Washington, DC?

Sorry, darlings, I know we've fallen down on the job recently, but my typist is juggling a number of deadlines at the moment along with other assorted madnesses of March. We'll get back to you soon with something worth sinking your teeth into, we promise -- the blogalicious equivalent to this sublime strawberry-rhubarb pie the Shy One brought to dinner the other night: 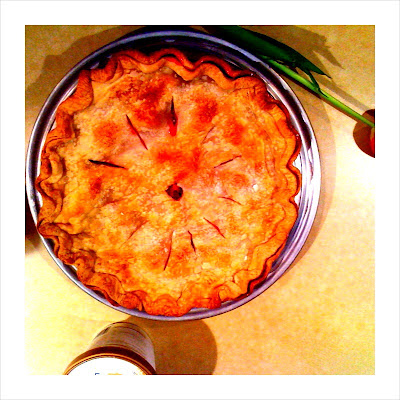 Doesn't that just make your mouth water? And doesn't it bring to mind that goofy duet from Prairie Home Companion that you never think you are listening to until you find yourself humming it several hours after you've gotten out of the car?

Gosh, the mind is funny, isn't it? Peace out, little babies. And try to stay away from the Babycook, will you?
Posted by Roxie Smith Lindemann at 6:16 PM