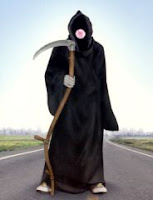 It's Friday, darlings. The embodied me has been dead for a little more than two weeks, and countless thousands are dead or missing in Haiti. With all due respect to the grim reaper and the souls of the departed, can we agree that some healthy distraction is in order? Good. I thought so. We've racked our very small brains and trolled the interwebs, trying to come up with tasty treats to appeal to a number of the different demographic groups who hang out here. Even if you don't fit precisely into one of these groups, we hope you'll find something that will burn a few of the seconds that stand between you and happy hour this afternoon. And don't worry -- We'll save you a prime seat at Ishmael's, the seedy yet cozy bar around the corner from the global headquarters of RW Enterprises, LLC. Barkeep Peter Coffin's got half-price specials on rum drinks today, because there's a warming trend happening in our neck of the woods. Come by for a tropical beverage and a towering platter of nachos. Order your own extra queso sauce, though, because you know Moose won't be sharing hers. Love you, darlings. Mean it. Play on. 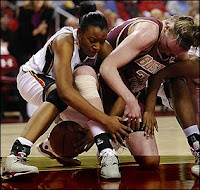 For the Big and Tall Girls: Put down your hankies and pick up your pom-poms, wimmin, we got us some basketball blogging to do! We apologize for the deplorably late start on this season's worshiping at the Shrine of the Holy Round Ball, but it's taken us some time to get to know Coach B's band of mighty women, a team so new and young that the players have training wheels on their athletic shoes. How young is the team the moms have taken to calling the Baby Terps or the Littlest Turtles or the Terratots? Well, in last night's win over Boston College, the Terps had three freshmen in the starting lineup. This team is so young that sophomore Lynetta Kizer is considered, like, a tribal elder, unless you count guard Lori Bjork, a grad student who joined the Terps last season after three years at Illinois but couldn't play until this year because of NCAA transfer rules. (And you should definitely count Bjork, by the way, who has been rocking the house from 3-point land in the last couple of games and seems to be a calming presence on the floor.) The team seems to be finding its groove after some early losses away from home, including a Tobacco Road meltdown against NC State last week. We're hoping that last night's win, coupled with a squeaker in Charlottesville on Monday, will earn the Baby Terps a spot in next week's top 25. The moms haven't picked a favorite yet among the Terratots, but they are keeping a close eye on 6'3" forward Diandra Tchatchouang (pictured above left; photo by Jonathan Newton, Wa Po) who scored a game-high 18 points against BC. At first they were amusing themselves by trying to come up with nicknames more pronounceable than Tchatchouang. They liked both "Ka-ching" and "Szechuan," but Moose felt so guilty about seeming to mock someone with an unusual name that she started cheering in Tchatchouang's native French. Yep, Diandra, that's us right there at mid-court -- the crazy old broads with the hand-painted signs shouting "Allons y!" every time you touch the ball. Bonne chance, petite tortue!

For the Queer Law Geeks Ambivalent About Marriage But Unable to Stop Paying Attention to the Issue: Big doings this week with the start of the federal case on the constitutionality of California's Prop 8. Perry v. Schwarzenegger may ultimately give the Supreme Court of the United States a chance to weigh in on whether marriage inequality is compatible with those four little words conveniently carved into the frieze the justices see on their way into work each morning. The law prof bloggers have been on this case like white on rice, so click over to see what Katherine Franke has to say about Judge Vaughn Walker's apparent willingness to entertain the idea that the state should get out of the marriage business altogether. Or consult Nan Hunter's list of recommendations of where to go for the best coverage of the trial. Tenured Radical, who is back on native soil and has returned to blogging with a vengeance this week, has a good analysis of the testimony by sex and marriage historians Nancy Cott and George Chauncey.

For English Profs Who Still Can't Believe There Will Never Be Another MLA in December: The backlash is organizing. It's virtual, it's viral, it's as full of irony and wit as a blog written by a really funny dead dog! Inside Higher Ed is already reporting on it. You can follow it on Twitter! Join a Facebook group! Steal cleverly Photoshopped images (as we did, at left) from the blog that's been set up for "MLA 2010, the best conference that never was nor will be." (With the shift in schedule, there won't be a convention in 2010. The next meeting will be in January, 2011 in LA.) We're impressed with this effort and encouraged to see other humanists becoming humorists. (Hey, maybe that's what post-humanism is! Haven't you always wondered?) We think they need some help, though. A virtual mock conference is going to call for a massive effort of faux-organization. (Thought: Here's something Bush could do with his post-presidency!) Roxie's World would like to offer our services to MLA 2010. We'll task our pack of loyal, exceptionally clever readers to help come up with session titles for the conference that shall never be. So far, they've come up with "Teachers Travesty: The Best of Professorial Invective from 2010." That's a good start, but let's keep the ball rolling. Try these on for size:
Hey, it worked for these guys, in a slightly different context:

Your turn, kids. Special session titles due by noon on Monday. Get cracking! Best proposal wins one of those cute mankinis they're flacking over at MLA 2010. Peace out.
Posted by Roxie Smith Lindemann at 10:35 AM