"I told you so" is no doubt fairly low on the maturity scale when it comes to political emotions and reactions, but, as we watch the world spin out of control over the astonishing news that born again deficit slayer President Barack Obama is apparently not the ideological soulmate of Che Guevara, we have to admit to feeling a powerful urge to climb up on the nearest rooftop and shout at the top of our collective lungs that we told you so, because, well. you. know. we. did. repeatedly. 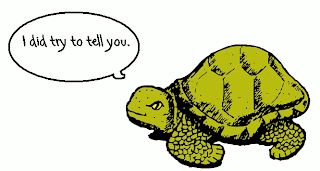 We're in good company, though. In the wake of Obama's proposal to freeze non-defense federal spending, Paul Krugman can't resist pointing out to progressives who are frustrated with his failure to challenge conservative ideology that the president is actually being the "same as he ever was" and that the evidence of his centrist inclinations was there for the seeing -- or not seeing -- all along. Melissa McEwan ends a scorching denunciation of Obama's embrace of "classic starve-the-beast conservatism" with this sardonic glance back at 2008's contentious Democratic primary race, in which she herself was excoriated for refusing to jump on the Obama bandwagon (Shakesville stayed admirably neutral as the battle between Obama and Hillary Clinton wore on and defended progressive, feminist values rather than a particular candidate):

But getting shouted at that I was a stupid, racist, man-hating traitor was fun, too.

That was fun, wasn't it, Liss? And the truth is it is not as fun as we imagined it might be to sit back and feel smug about having judged Obama correctly early in the game. (Our position, you may recall, was that Clinton and Obama were both centrists, so why not support the centrist with enough Washington experience to understand the scale of the challenge and the nature of the [implacable, uncompromising] opposition?) The stakes are too high. The political cost for the country if Democrats spend the next year cowering in a corner rather than producing results that will make a difference in people's lives is too great. Obama won because he inspired a lot of people to believe that voting mattered and government could work on their behalf. He and the Democratic congress have to start making good on some of their promises in order to turn back the rising tide of skepticism and fear that our political system and government are irreparably broken, paralyzed, unequipped to respond to the many urgencies facing the country.

Steve Pearlstein has a great column in today's WaPo on what the president would say in tonight's state of the union address if we lived in a more honest world. And Timothy Burke, over at Easily Distracted, has a moving, if dispiriting, account of the political malaise he senses in the midst of the Democratic meltdown, especially around health care but around much else as well. It's definitely a glass half-empty piece, and it ends with a confession of helplessness. We don't usually traffic in helplessness here in Roxie's World, but Burke is a smart guy and his reflections resonate with a lot of conversations the moms have been having lately with friends and fellow travelers horrified by the Democrats seeming to fall apart over the loss of a single senate seat. It's worth reading as you formulate your own assessment of the state of the union. (Secretary of State Clinton will miss Obama's speech, by the by, on account of she's got some serious world-saving work to do in London, at meetings on Yemen and Afghanistan. Girl's too busy to be jumping up and down over ideas that probably make the back of her throat burn.)

Honor bright, kids, there is little satisfaction for us in having been right about Obama all along. There was no joy at all in Moose's voice when she turned to Goose in the car last night and loudly whispered, "But it beats hell out of having been wrong, doesn't it?" No joy. None at all. Srsly.
Posted by Roxie Smith Lindemann at 1:48 PM