(With apologies to Dana Luciano, whose brilliant book you should buy right now.)

Moose is digitizing me. 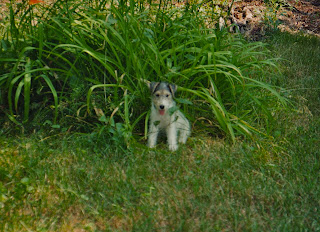 She doesn't know what else to do. Her brain refuses to focus on any of the ten thousand things she ought to be doing now that the holidays are over and the second semester of her leave is about to begin. She has an article to write and a mountain of footnotes to scale on the Most Overdue Project in the History of American Publishing. Meanwhile, here at the global headquarters of RW Enterprises, LLC, the political team thinks we should be blogging about Harry Reid. The committee to save the humanities is begging us to jump into the post-MLA debate about why the humanities is in such desperate need of saving. (You can tune into that debate here and here.) None of that, you may have noticed, has been getting blogged in Roxie's World.

Since Friday, what was the embodied me is a box of ashes sitting untouched on the love seat in the living room. Goose picked it up at the vet's that afternoon. She and Moose examined it briefly and then raced off to Best Buy to get a new TV for their bedroom. Later, Moose made a funny joke on Facebook about consoling herself with a TV rather than a puppy: "Low maintenance, reasonably good company, minimal risk of heartbreak if it dies," she quipped.

She spent much of the day Saturday going through a large box of photos from the Gutenberg era of our family history. As she pored over the envelopes full of pictures, she was overwhelmed by a flood of memories. Grief compelled her to search for images of me, but the search not surprisingly exposed how deeply the story of my growing up is interwined with several other stories that unfolded during the period of my earthly life: the story of the moms as individuals and as a couple, their changing bodies, clothes, and hairstyles as they move through middle age; the story of the home they bought in 1994 and loved enough to re-imagine and rebuild in 2003; the stories of all the friends and relations who have have passed through their lives, my life, this house -- the English profs and lawyers, poets and gadflies, grad students and toddlers terrified of dogs, aging parents and beloved nephews become beloved nieces. Moose gazes at the pictures and feels slightly unhinged, pulled toward a past that suddenly feels more vibrant and real than the present.

That, perhaps, is why we feel so compelled to arrange grief -- because it is so painfully good at re-arranging, or dis-arranging, us. "Life right now is a series of double takes and disappointments," Moose wrote to a friend last week, "as I imagine I see and hear Roxie everywhere." Goose walks in the door and can't not pause on the threshold to listen for a bark or a whine. Moose still feels as if she is forgetting something when she heads upstairs at night without an old dog in her arms, ready for bed. Out in the world, they have to remind themselves, "Oh, no, we don't need to worry about getting home to tend to our girl." Arranging grief is a way of assuring ourselves that we are still here and our memories of the dearly departed are sufficient to the task of keeping something of them with us. Something -- as if memory were material. 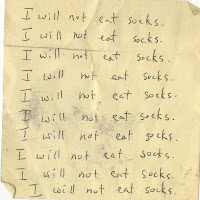 (Note left on the refrigerator by Roxie's sitters during the moms' first trip to Europe together, 1995.)

A photograph is in effect a memory made material, as is a smudged, wrinkled square of paper that somehow managed not to get thrown away in nearly fifteen years. It's funny, though, that now, for Moose, the impulses to "arrange grief" and preserve (queer/family) history combine to produce this effort to "digitize me." She goes through the box of photos and memorabilia and scans a selection of pictures and objects because she knows she will never make a scrapbook like the ones lined up in a row (and crumbling) on a basement bookshelf. Her notion of an archive is now saturated with assumptions about electronic textualities. An "archive" is a collection of objects turned into images, a set of data that is searchable, mineable, and broadly accessible. Of course, Moose's digitization of me will not for the most part be an archive in that public sense, beyond the few pics that are likely to show up here. She will use these newly scanned images to augment a lachrymose iPhoto slideshow played against the background of James Taylor singing "You've Got a Friend" to which only the nearest, dearest, dog-craziest, and drunkest will ever be subjected. Nonetheless, her building of a mostly private electronic archive is informed at every point by the post-Gutenberg understanding that what gets digitized is now the stuff of memory, history, and meaning itself. It's telling that it never occurred to her to memorialize me by printing out copies of the digital photos she has taken in the past several years. It seemed far more important -- and more permanent -- to create digital versions of the old prints gathering dust and moisture in a box downstairs.

Moose's weekend project is a modest but revealing example of the knowledge-world we now inhabit, in the wired, wired West. In an odd way, it might even help to explain why the MLA, a professional organization not generally thought of as cutting edge, was going out of its way to raise its digital cred this year -- awarding its prestigious Prize for a First Book to QTU's own Matt Kirschenbaum for his amazing Mechanisms: New Media and the Forensic Imagination and hosting a tweetup, through MLA exec direc Rosemary Feal, who twittered her way through the convention and invited followers to a party in the penthouse of the Loews Philadelphia hotel on the last night of the convention. (Inside Higher Ed has a report on the tweetup here. ProfHacker has a round-up of commentaries on the Twittering of #mla09 here.) If the MLA has jumped on the digital bandwagon, it's not really a bandwagon anymore, kids. It is just the way we think.

Digitize me, Moose, or I shall be more than dead. I shall be lost to cyberspace. And so she stands at the scanner, arranging grief, imagining heaven, dreaming a new humanities -- with bigger budgets, plenty of room for "post-," "trans-," and "inter-" disciplinarities, and critters, of course. Lots and lots of critters.
Posted by Roxie Smith Lindemann at 1:53 PM

Email ThisBlogThis!Share to TwitterShare to FacebookShare to Pinterest
Labels: animals and humans, blogging, death, love, my moms, pictures of me