We had another post in mind for today, one that involved high degrees of snark regarding the decline and fall of NBC and the epic knicker-wadding going on between Jay Leno and Conan O'Brien, two individuals about whom we could not care less if we tried. (Steve Pearlstein has a good piece on the brouhaha in today's Wa Po, arguing that NBC's "late-night farce is emblematic of just about everything that is wrong with American business these days." Meanwhile, in the Times, Maureen Dowd proves she was always cut out to be an entertainment reporter with a column focused on the burning question of how NBC president Jeff Zucker manages to survive, given the amount of damage he has done to the peacock network. Here's hoping MoDo will keep her jaundiced eye more on Hollywood in the future. Jeff Zucker deserves her. Hillary Clinton and the rest of the nation's grownups do not.)

Anyway, we were going to propose that Wanda Sykes be brought in to broker a peace deal between the warring tribes of aging Leno-ites and Conan's vengeful barbarians. We think NBC would do well to fill its entire prime-time schedule, five nights a week, with the wit and wisdom of Wanda Sykes. We'd tune in, and so would every other vagina-equipped person in America.

The terrible news from Haiti today has diminished our appetite for snark, however. As the dimensions of the tragedy there begin to emerge, we pause to send good thoughts in the direction of the island nation and our deepest condolences to those who have lost friends and family. We also urge readers who can to make a contribution to the earthquake relief effort being organized by Partners In Health, the international health and social justice organization founded by physician and anthropologist Paul Farmer. It's super easy to give. Please do so if you can. 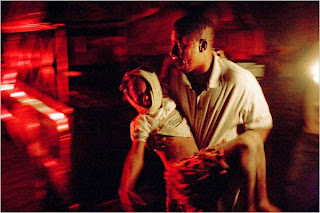 (Photo Credit: Ivanoh Demers, Associated Press, 1/12/09. New York Times caption: "A man carried a child outside the Hotel Villa Créole on Tuesday evening. Haiti sits on a large fault line that has caused catastrophic quakes in the past, but this one was described as among the most powerful to hit the region.")
Posted by Roxie Smith Lindemann at 12:25 PM