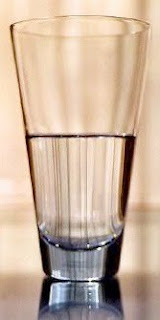 But the glass is half empty.

And there might be a couple of holes in the bottom.

Oh, and possibly some chips on the rim that will cut your lip as you take that first highly anticipated sip.

Plus, the beverage may be just a little bit, um, toxic.

But, still, you know, it's free, and if you're one of the beloved humanities grad students who hangs out here, you will probably appreciate that today, what with all the papers you still have to grade, and the truly terrible, awful, horrible report just out from the Modern Language Association on the utterly sucktastic job picture for PhDs in English language and literature.

Go on -- Take a sip. Even if it's toxic, if you keep reading this, you won't care. (Sorry, Julie. I know you hate it when we go gloomy, but Eeyore is in the house today.)

Here is the opening to Inside Higher Ed's report on the MLA's job forecast, which we might shorten to, "Cloudy with a chance of mass suicide":

The job picture in the humanities is going from bad to worse.

The declines in each of the last two years are the largest ever recorded by the MLA, since it started tracking the trends in the association's Job Information List 35 years ago. The list has also never had fewer notices of openings. The MLA's job list does not include all jobs in English and the humanities, but over time, the ups and downs in openings on the MLA list have been an excellent proxy for judging the overall state of the job market.

"This is a historic low," said Rosemary Feal, executive director of the MLA. "We've never seen a recession like this." (Emphasis added, because Eeyore is a sadist and doesn't want you to miss a single depressing detail.)

Oh, boy, Julie is going to be mad at us.

Feal comments later in the story that the decreasing share of jobs that are on the tenure track now threatens the integrity of programs. "We've passed that tipping point where you cannot sustain a high quality overall educational experience when you've got 70 percent or more of the teaching done off the tenure track." Feal argues against the downsizing of graduate programs as a response to what she sees as "short-term fluctuations." The solution, she says, is "to increase the number of viable academic positions."

Which for some reason made my typist think, yet again, of the wisdom of Mr. Bruce Springsteen, who crooned, apropos of job losses a few years ago in the manufacturing sector of the economy:

Oh, and if you lit critters were thinking of changing fields to improve your chances of finding gainful employment, think again. Inside Higher Ed reports that the situation seems similarly grim in other humanities fields, including history and philosophy.

Go read the whole story. Then go to bed. Dream pretty dreams about your fellow citizens coming to their senses one day and realizing that high-quality, affordable higher education is in everybody's interest. Imagine that we will have leaders, both on campus and off, who will have the courage and will to raise the kind of revenue it will take to fund such a system, in which the humanities would be valued, neither as the grammar police nor the entertainment wing of the campus, but as the bastion of critical analysis, creativity, reflection, and historicization it has always been. Then get up tomorrow, caffeinate yourself, and sit your a$$ down at the desk and finish that dissertation that you think is going to save the world, because the world sure as hell needs saving, so why shouldn't you be the one to do it?

Pretty to think so, isn't it, darling? Go to bed. You've got work to do.
Posted by Roxie Smith Lindemann at 10:24 PM