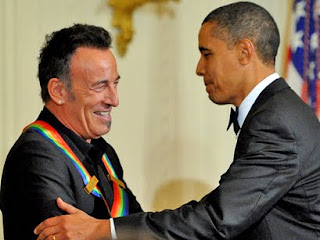 One of the major deities of Roxie's World, Jersey rocker Bruce Springsteen, was in town this weekend to receive, um, rock-star treatment as one of the Kennedy Center honorees for 2009. The festivities included a dinner Saturday evening hosted by Secretary of State Hillary Rodham Clinton (where, according to Wa Po, the SOS wore blue while her husband "wore a hiply straight tie and the biggest grin imaginable as he held up the receiving line"), a reception at the White House, and, of course, the big show at the Ken Cen, where a host of luminaries paid tribute to Springsteen and the other four honorees (Robert De Niro, comedian Mel Brooks, jazz legend Dave Brubeck, and opera singer Grace Bumbry). (Two hours of highlights from the show will be broadcast on CBS, December 29, at 9 PM.)

Spoiler Alert: Skip this paragraph if you plan to watch that highlight show and will hate knowing in advance who sang what Bruce song. You have been warned, you rockin' nerd. According to AP,

John Mellencamp sang "Born in the U.S.A.," Jennifer Nettles from Sugarland did "Glory Days" with a country twist, Melissa Etheridge rocked the house with "Born To Run" to a standing ovation, and Sting ended the musical tribute with "The Rising" with help from a choir.

Hm-m-m. Melissa Etheridge doing "Born to Run." That sounds like a strong argument for tuning into a highlight show, don't you think? One of the finest Bruce covers we have ever seen is Melissa's 1995 performance (actually a duet with the Boss himself) of "Thunder Road" from an episode of MTV Unplugged. It is a glorious blending of voices and a rare meeting of minds from different but deeply connected musical generations. When Bruce steps back from the mic and lets Melissa take the sexy line, "So Mary climb in," that sets up the song's youthfully audacious conclusion ("It's a town full of a losers / And I'm pullin' out of here to win!"), you catch a glimpse of the proud, passionate dyke you always knew was at the heart of Springsteen's music.

Well, or at least that's what Moose says. Go watch the vid for yourself and see what you think.

The best news coming out of the weekend from a Bruce-centric perspective is that Mrs. Boss, E Street vocalist Patti Scialfa, was prominently on her husband's arm throughout the proceedings, thus quashing for the moment the latest rumors of marital discord. Since Bruce was named as the "other man" in a New Jersey divorce case last spring, fans have lived in fear that Patti might go chasing after Bruce with a Fender guitar in the middle of the night, possibly causing him to smash his car into a fire hydrant and a tree. We're pleased to report that Bruce and Patti looked not the least bit Tiger-ish but seemed, rather, to be as cozy as a couple of kittens, so ordinary and comfortably middle-aged looking that Moose pronounced them "Ma and Pa New Jersey": 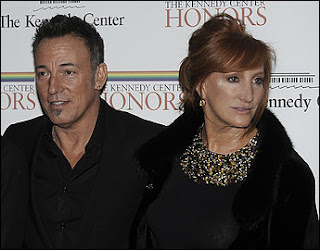 In the competition to get off the funniest Bruce-related joke of the weekend, the leader of the free world performed well ("I'm the president, but he's the Boss," quipped Obama) but was bested by the most trusted newscaster in America, Jon Stewart, who offered up a brilliant theory of how Bruce came to be. Again, according to the AP report,

"I'm not a music critic, nor historian, nor archivist," Stewart said. "But I am from New Jersey. And so I can tell you what I believe . . . . I believe that Bob Dylan and James Brown had a baby."

As the story goes, Stewart said, Dylan and Brown abandoned the child on the New Jersey Turnpike, and the child was raised by "a pack of feral vaudevillians. That child is Bruce Springsteen."

First Lady Michelle Obama was reportedly so tickled by this origin story that she "doubled over laughing."

One of the dumber lines to emerge from the festivities was offered up by the Boss himself and served as the headline on an otherwise smart, insightful profile of Springsteen by Joe Heim that ran in the Sunday Wa Po. Are you ready? Here's the big, deep thought the 60-year-old musician has about his extraordinary career and oeuvre:

My music is a music of identity.

Of course it is, Bruce baby, but pardon us while we try to clear the burning sensation from the back of our throats, will you? Springsteen elaborates on the point by enumerating some of the "identity questions" that have fueled his musical explorations of the American soul:

Who am I? Where did I come from? How did I end up here? Who are my parents? Where did they come from? What were the forces that affected their lives? What are the forces affecting the lives of my friends right now? Where is the country headed? What does that have to do with me? What is my responsibility?

All true, of course, but not especially illuminating because of the simplistic, Oprah-fied model of identity that seems to be invoked. In our judgment Springsteen's music is most powerful and interesting when it ventures out into the darkness on the edge of every psyche, that place where identity collapses beneath the weight of doubt or temptation ("God have mercy on the man who doubts what he's sure of," concludes the tortured, weary speaker of "Brilliant Disguise") or gets smashed to smithereens by socioeconomic pressures ("My sweet Jenny, I'm sinkin' down / Here darlin' in Youngstown," says another speaker of his struggle to survive in a postindustrial Midwest). Springsteen is equally adept at exploring identities shattered and transformed through the ecstasies of touch, travel, and music, moments of heightened consciousness and connection that blur the boundaries between self and other, individual and collective. "Born To Run" is the greatest rock song ever written because in four stanzas and four and a half minutes it careens through all of these extremes and intensities -- the terrors of a town that is "a death trap, . . . a suicide rap," the delights of a desire so powerful it would lead one to imagine dying with one's beloved "on the streets tonight / in an everlasting kiss," the promise of eventually finding the realization of all one's dreams out on a highway "jammed with broken heroes on a last chance power drive."

Elsewhere in the Wa Po profile, Springsteen and Heim have more interesting things to say on the essential subject of the Boss's relationship with his audience, of his viewing the whole trajectory of his career as an "ongoing conversation" with his fans. His palpable desire to make contact with his audience has always been part of what made Springsteen such a thrilling performer. His shows are habitually compared to evangelical church services, with Bruce taking on the role of a fiery minister who whips his audiences into frenzies of faith in the gospel of rock and roll. For Heim, the passionate and in some ways mystical bond between performer and audience is concretized in the image of Springsteen crowdsurfing, an old habit he has picked up again in recent shows that shows his faith that his fans will catch him (a 60-year-old guy, falling backward off a 4-foot riser) and return him safely to the stage: 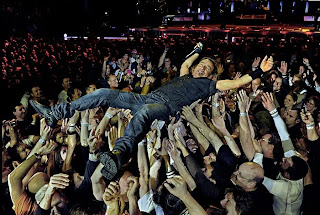 For us, the source of that bond is in the question the minister of rock has been asking audiences for years (and which finally found its way into a song, "Radio Nowhere," on 2007's Magic):

Is there anybody alive out there?

In the song, the question emerges out of the speaker's desperate hope for connection, his search for evidence of "a world with some soul." In his stage shows, the question is a taunt, a tease, a challenge. Prove to me that you're alive, he seems to say as he prowls the edge of the stage. Show me you've got the faith you'll need to stay alive in this hard, magnificent world. Prove it to me, he says, and "I'll prove it all night for you."

That's the bargain Springsteen struck with his fans some thirty seven years ago, and through the classics and the clunkers, he has held up his end of it. Go right ahead and fall, Bruce. You know our loving, capable hands will be here to catch you. All night long.
Posted by Roxie Smith Lindemann at 4:43 PM