And in Roxie's World, of course, gaywad = good. 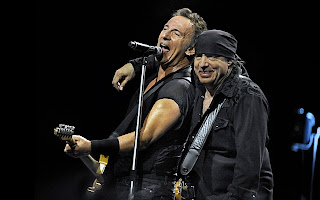 Coinkydink -- or proof that not all of Roxie's World's Garden State fans are English profs? You decide:

Just days after this humble dog blog wrote eloquently of "the proud, passionate dyke you always knew was at the heart of Springsteen's music," the cool rockin' daddy of the boardwalk announced his unequivocal support for same-sex marriage, which is being debated in the New Jersey legislature in the twilight of the administration of defeated Democrat Jon Corzine. The Boss put the following statement up on his Web site this morning:

Like many of you who live in New Jersey, I've been following the progress of the marriage-equality legislation currently being considered in Trenton. I've long believed in and have always spoken out for the rights of same sex couples and fully agree with Governor Corzine when he writes that, "The marriage-equality issue should be recognized for what it truly is -- a civil rights issue that must be approved to assure that every citizen is treated equally under the law." I couldn't agree more with that statement and urge those who support equal treatment for our gay and lesbian brothers and sisters to let their voices be heard now.

Oh, Bruce, how we heart you, you old fighter for justice, you beefy butch boy with adorable homoerotic tendencies (see photo above and this) and a deep archive of music largely dedicated to exploring the queer (= troubled, troubling, uncertain, unhinging, unsettling, eccentric) nature of desire and intimacy. We dig that you are using your considerable influence in your home state as a force for good and not for evil. We are pleased that you are coming out in support of same-sex marriage -- and refusing to play at the inauguration of the state's Republican governor-to-be (and die-hard Bruce fan), Christopher Christie.

No, darlings, marriage isn't the only thing, and, yes, we're as tired as the next homo of the issue sucking up every precious ounce of queer political energy in the universe. Hell, who knows? If we had the right to marry, we might endeavor to auction it off to help pay the bills during furlough season. Nonetheless, the battle is here, we have to win it, and we need all the friends and allies we can get to help advance the cause.

You are a most excellent gaywad, Bruce, by which we mean, of course, a genuinely fierce advocate for LGBT equality, as opposed to, you know, a weasel. Paws up to you, sir, and we will look for you, as always, out on the backstreets. No retreat, no surrender. Amen!