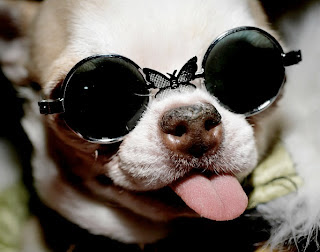 Virginia was called for Obama moments after the polls closed at 7 p.m. Same in DC at 8 p.m. Maryland polls don't close til 9:30 due to inclement weather in Terrapin Country, but it's not looking good. We apologize to all our loyal fans for being right in our predictions for the Crab Cake primaries. We were really hoping to be wrong. Moose spent much of the day scouring the internets looking for funny images of people eating crow in anticipation of more thrilling Clinton come-from-behind wins.

There is no bitterness in Roxie's World, but we can't face the long knives and the chortling and the prognosticating and the navel-gazing and the self-satisfied predictions that all boil down to, "The Homecoming King is way more popular than that geek-girl Valedictorian, don't you think? He is so awesome! Who cares if his health-care plan leaves, like, fifteen million people uninsured! Their hope will keep them healthier than insurance ever could!" Okay, it's possible we're feeling a little bitter this evening, but can you really blame us, kids? Could any candidate have withstood the unbridled sexist attacks to which Senator Clinton has been subjected? Is there really any concrete evidence to suggest Obama will be the kind of transformative leader his delirious fans seem to imagine he will be? Those convenient "present" votes in the Illinois legislature? All those votes in support of funding the war he claims to be so courageous in having opposed "from the start?" Is this really someone engaged in a new or progressive way of doing politics?

Sorry, darlings, but we can't do this tonight. We're tuned out the pundits and tuned into the finals of the Westminster Kennel Club Dog Show instead. As a tribute to our dear friend and deputy internets troller, Dudley, we are pulling for the beagle to take Best in Show tonight. It would be the first Best in Show win for the breed in the history of Westminster. If I weren't feeling bitter, I wouldn't bother to point out that terriers have won that title at Westminster a record 40 times, but there you have it. Go, Uno! Roxie's World is rooting for the hound!

Call us if official Butch Goddess Rachel Maddow shows up again on MSNBC, will you? She's on our short list for Best in Show, whatever the competition. We think Rache has a bit of the terrier about her, don't you? Smart, bossy, willful, full of fun -- Yep, definitely a terrier, and, this may be self-serving, but I'd say she's a fox, too, wouldn't you?

Chins up, kids. Tomorrow is another day.
Posted by Roxie Smith Lindemann at 8:03 PM